During development the game was originally going to be titled Darkstalkers: Jedah's Damnation. Two titles changing various aspects of the game, including the subtraction and addition of various characters were released in arcades as Vampire Hunter 2 and Vampire Savior 2.

Jedah Dohma, one of the high nobles of the demon world, Makai, is resurrected a hundred years after his death. Concerned of the condition Makai was in and the fighting of its nobles, Jedah decided the only way to save Makai was to recreate it. Using his former confidant and murder, Ozum, as the base, Jedah created his own dimension called Majigen. Soon after he summons souls he deems worthy to help feed and create his new world. 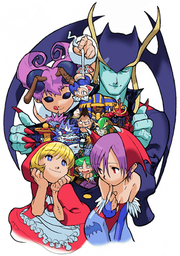 The arcade version of Darkstalkers 3 has 15 playable characters with home console ports featuring 18 characters. Two secret characters, Dark Talbain and Oboro Bishamon are alternate versions of characters present in the game. Shadow makes the player battle as the character they have previously beaten while Marionette creates mirrored matches where the player plays the same character as the opponent they're fighting against.