Resurrection's version of Darkstalkers 3 uses the original version of Vampire Savior's cast and excludes Pyron, Huitzil and Donovan from its roster. Updated artwork for the game was provided by Stanley Lau, who goes by the pen name Artgerm. In promotion for the release, several digital Valentine's day cards were released and various contests were held for the game. Although the game was a digital top selling and well recieved, Capcom stated it was not a commercial success.

Darkstalkers Resurrection features online play utilizing GGPO netcode. Players can set up tournaments with up to eight other players and upload videos of matches to Youtube. Tutorial modes are included, allowing players to watch combos and attacks performed in order to learn new techniques. During game play, challenges can be unlocked that give the player points they can use to buy artwork or various endings and opening scenes.

Graphical enhancements include a smooth filter, crisp or play the game in it's original format. Wide screen, full screen, arcade casing, retro and over the shoulder views are also available. 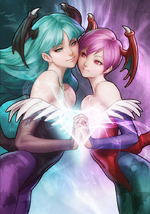