Darunia is a character in The Legend of Zelda series.

Darunia is the leader of the Gorons. He has a hard time trusting people outside of his race, specially since the cavern where the Gorons get their food from has become infested with monsters. When Link plays Saria's song on his ocarina, Darunia dances and enjoys the "hot beat". Once Link defeats the boss of Dodongo's Cavern, they become "soul brothers".

Later in the game, Darunia appears in the Fire Temple, explaining to Link what happened to the Gorons and that he is going to find the boss. After Link defeats the boss, Darunia is revealed to be the Sage of Fire. 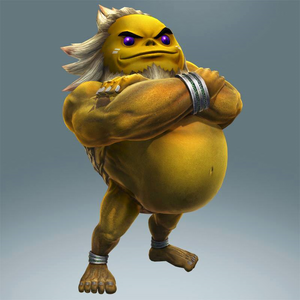 Darunia has been revealed to be a playable character in Hyrule Warriors.