DeSmuME (also known as YopYop DS) is a freeware emulator for the Nintendo DS created by YopYop156. DeSmuME is written in C++ for Microsoft Windows and can play Nintendo DS homebrew and commercial ROMs.

The emulator itself is in French (with user translations to English and other languages). It supports many homebrew Nintendo DS ROM demos as well as a handful of Wireless Multiboot demo ROMs. DeSmuME can also emulate some commercial ROM titles which other DS emulators like iDeaS and Dualis cannot.

YopYop has stopped development on DeSmuME due to a change of laws of emulation in France. However, the source code has been released and two different programmers, thoduv and Guillaume have continued to work on this emulator. 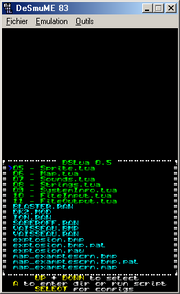 This emulator is packed on the WinDS emulator on an English translation and probably upgraded, and equipped with some new stuff like screen separation, editing, re-sizing, etc. Not only modifications on the screen but also on the gameplay.