Delibird(デリバード, Deribādo ) is one of the 493 fictional species of Pokémon from the Pokémon Franchise – a series of video games, anime, manga, books, trading cards and other media created by Satoshi Tajiri.

The purpose of Delibird in the games, anime and manga, as with all other Pokémon, is to battle both wild Pokémon, untamed creatures encountered while the player passes through various environments, and tamed Pokémon owned by Pokémon trainers.

Its name is a combination of the words delivery and bird, in reference to its avian nature and tendency to deliver food to either its chicks or those in need. The "deli" part of its name could also come from delicatessen, due to Delibird's stash of food, and its tendency to give it out to those in need.

Aspects of Delibird's appearance appear to come from the Rockhopper Pengui or possibly a Snowy Owl. However the rest is classed with red and white plumage styled so as to give a Santa Claus-like impression. It is always pictured carrying a sack with it, further promoting the Santa Claus image, although one of its Pokédex entries suggests that the "sack" is actually its tail. In Pokémon Chronicles, the sack was shown attached to its backside.

Delibird is said to make its home at the edge of steep cliffs. It spends all day searching for food, which it stores in its sack/tail and brings back to its chicks. The food Delibird gather is what makes them particularly noteworthy. Within the Pokémon universe, Delibird are known to save the lives of many lost and starved mountaineers by sharing their food with them. The most famous example concerned a renowned explorer who went on to scale Mount Everest thanks to a Delibird's gift of food.

On the other hand, a Delibird under attack will fling its stored food at the opponent as a means of projectile weapon. This is perhaps the basis for its signature attack, Present, which is at once an attack only Delibird can learn and the only attack Delibird can learn naturally (through Leveling Up). When used, Present may either be a weak, rather strong, or very strong attack, or end up healing the opponent (possibly the opponent eats the thrown food instead of getting hit by it).

Despite being based on a penguin, a bird famous for being flightless, it is in fact able to fly.

Delibird first appeared in Pokémon Gold and Silver. It is also a swarming Pokémon in Diamond and Pearl. (On certain days, it can only be found on route 36 at lv 32.) Delibird only learns one attack, Present, without the use of TMs or HMs. Statistic wise, Delibird is very weak.

The Delibird species has made quite a few appearances in the animé. Its debut was in episode 233 (Dues and Don'ts), in which a Delibird belonging to Team Rocket (the organization) follows agents Jessie, James and Meowth, under orders to collect the emormous debt the three have amassed during the years with constant requests for Pokémon-shaped mechas and other devices. It appears in a few more episodes (#236-Xatu the Future!, #246-Enlighten Up!, #272-Can't Beat The Heat! and #453-Grating Spaces!), where it harasses the Rockets to pay their debts. It disappears when the action moves to the far-off Hoenn region.

Another Delibird has appeared in Delibird's Present, an episode of the Pikachu's Winter Vacation 3 holiday special (also shown as part of Pokémon Chronicles). This Delibird is a helper of Santa Claus and carries some of his presents, which it temporarily mislays during the course of the story after Meowth agitates a Skarmory. But actually, Ash Ketchum's Pokémon were playing Snowball Bowling and Totodile accidentally blasted his snowball too high, hitting Delibird and Skarmory, thus making Skarmory mad... 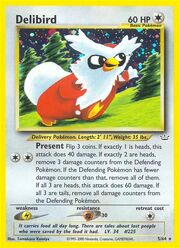 Delibird has in the following expansions: