Devil May Cry​ (デビル メイ クライ｜Debiru Mei Kurai?), also is a series of Hack and slash video games, developed and published by Capcom and created by Hideki Kamiya.

The Devil May Cry series has become a large property spawning not just numerous video games, but also various anime, manga, and books.

Gameplay in the series focuses heavily on stylized fast-paced combat, with platforming and puzzle solving elements. In combat scenarios, the goal is to get a high style ranking, achieved by having long strings of consecutive attacks without receiving damage (which will set the style gauge back). In later entries, emphasis is added in varying attacks and weapons. The style ranking is marked by letter grades, marked from lowest to highest: D, C, B, A, S (SS and SSS are added in later entries). Each game is divided into around 20 levels called "missions", with a ranking ranging from D to S being rewarded on completion.

Devil May Cry is known for its high difficulty.

The series is set in the modern era, although its lore stretches back roughly two millennia. Two thousand years ago, Sparda, a powerful and benevolent demon, turned against his kind to protect humanity. He defeated Mundus, the King of the Underworld, and sacrificed a great portion of his power to separate the human and demon realms. His actions over the next two thousand years are shrouded in mystery, but he eventually married a human woman named Eva, with whom he had twin sons named Dante and Vergil.

The series is inspired by Dante's Inferno, with several characters being named after characters from the work and the Christian influence in the demonic aspect of the series's mythology. Additionally, Renaissance-era Europe is a prominent influence in the architecture seen throughout games. 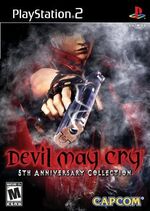 Devil May Cry HD Collection is a high-definition bundle, containing HD remasters of the first three entries in the series.