Dewgong's name is derived from the real animal which has a similar, but much larger, body: the dugong. In the beta versions of Red/Blue, Dewgong's name was originally going to be Manaty, a reference to the manatee (as revealed in the second edition of the Nintendo Official Magazine Pokémon Special published in the UK in 1999).

Dewgong's appearance borrows some characteristics from the real species of the Sea Lion, the Pinniped Seal, the Beluga Whale and the aforementioned Dugong and Manatee. It has a large but slender body completely covered with thick, but smooth white fur, ending in a fan-shaped tail. Dewgong has a horn on top of its head. In the days of sailors Dewgong were often mistaken for mermaids.

Dewgong is an aquatic creature which prefers the icy cold water of the polar oceans. It can survive in such low temperatures by storing thermal energy inside its body, which enables it to continue swimming at a steady 8 knots (14.8 kilometres per hour) even in freezing waters. In fact, the colder the water, the more lively Dewgong gets.

Dewgong is an excellent swimmer. Its streamlined body is highly hydrodynamic and its long tail allows it to change direction quickly.

In Pokémon Red and Blue, Dewgong can be found within the Seafoam Islands. In Pokémon Yellow, it is additionally available in Cinnabar Island as an in-game trade. In Pokémon Gold, Silver and Crystal, Dewgong is not available in the wild, but its pre-evolved form, Seel, is.

In Pokémon FireRed and Pokémon LeafGreen, Dewgong is available in the Seafoam Islands, and high-level Dewgong can also be found in the Icefall Cave. In both places it is harder to find than its unevolved form.

Dewgong's stats are very well-rounded and balanced, but none of them are particularly high. Its Thick Fat characteristic grants it additional resistances against Fire and Ice-type attacks. The other characteristic, Hydration, is a new one, possessed also by its pre-evolution Seel, cures all status anomalies when the weather is rainy.

A Dewgong's cry is slightly similar to the Lickitung's cry.

Dewgong has not made many appearances. In episode #61 (The Misty Mermaid), the Seel in possession of Misty's sisters (the stand-in Cerulean City Gym Leaders) evolved into Dewgong. Another Dewgong was used by Pryce, the Mahogany Town Gym Leader, in his badge battle with Ash. Dewgong was also used by a trainer named Neesha in Pokémon: The First Movie as a means of crossing an ocean during the storm Mewtwo created. Afterwards, it was captured and cloned.

Lorelei uses a Dewgong in Pokémon Special. It is capable of using Ice Beam to create paths of solid ice on which it moves, similar to Iceman. In Volume 4 of The Electric Tale of Pikachu, Rudy's sister is seen drowning with a Dewgong instead of a Seel like in the anime. 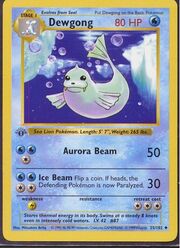 Dewgong is one of the most prolific stage-1 Water types in the card game, for it wielded powerful attacks such as Aurora Beam, which does 50 damage while only requiring three energy. It has also appeared in EX Dragon Frontiers, and like every other Pokémon except for 4, is a δ Pokémon. It holds the Delta Protector Poké- Body, that reduces damage from δ Pokémon, making it very useful in prereleases. This is a list of all its other appearances: