Diglett's name seems to combine dig and piglet or lett as a diminutive suffix. Its Japanese name simply refers to the word dig. In the English beta version of Pokémon Red and Blue, Diglett's name was still Digda.

Diglett is a small mole-like creature. The top of its head is rounded, and its thin skin is covered with short brown fur. It has two small black eyes and a large roundish pink nose. Interestingly, to date, no one has ever seen the entire body of a Diglett. If seen above ground, it usually only sticks its body out of the ground about 8 inches (0.2 meters). Therefore it is impossible to know Diglett's true size, even when they are called out of their Pokeballs. Some believe it has legs that it uses to dig, while others believe it is limbless and instead burrows like a worm or snake. The game Pokémon Snap appears to support the latter, as Digletts can be seen leaping out of their holes. However, in the Pokémon Mystery Dungeon games, it was suggested that Diglett have legs and feet. The best answer is that they have very small legs that make little difference in height. This also supports the reason they never walk; their legs are too small to walk with. An interesting thing to note about Diglett (and Dugtrio) is that they learn Cut, Scratch and Slash. This also supports the theory that they have arms/claws.

Diglett appears to be very similar to the artificial moles used in Whac-A-Mole arcade games.

Diglett's thin skin makes it vulnerable when it spends too much time above ground. The sunlight can heat up its blood, weakening the Diglett. Therefore its natural habitat is underground, usually about one meter below the surface. When it burrows along at this shallow level, displaced soil can be seen along its path aboveground as a result. This makes it popular among farmers, who use Diglett to till their fields, preparing them to grow crops.

Diglett's natural diet consists of the roots of wild plants it finds while burrowing. It also likes to live in the huge tunnels made by the Pokémon Onix, due to leftover scraps of food. In the Kanto region there is a huge tunnel built by hordes of Diglett - this tunnel, called Diglett's cave is a tourist attraction.

Wild Diglett can be only found in Pokémon Red, Blue, Yellow, Gold, Silver, Crystal, FireRed, LeafGreen Diamond, and Pearl. Countless wild Diglett and evolved form Dugtrio inhabit Diglett Cave, a natural Diglett-dug tunnel that connects Pewter City and Vermilion City. In Diamond and Pearl, Diglett are less common, but they can be found on Route 228.

Diglett's high Speed stat makes it a quick attacker, but its very low HP (which is the second lowest HP value in the games aside from Shedinja) gives it very little stamina if it gets attacked. The greatest attack Diglett can have is "Earthquake", which is super-effective against Electric-type Pokémon.

Diglett are also found in the Nintendo 64 game Pokémon Snap in the Tunnel Course. Diglett are seen popping their heads around a solitary Pikachu, and as pictures of Diglett are taken, more Diglett will appear. Eventually, Dugtrio will appear for photographing as well.

In Pokémon Special, Diglett makes a cameo in the Red, Green & Blue chapter in Raging Rhydon as a Mt. Moon wild Pokémon. 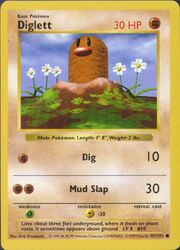 Diglett in the Base Set

Diglett has appeared in the Pokémon Trading Card Game first in the Base set series. Diglett also appears in the Team Rocket set, Base 2 set, Gym Heros as Brock's Diglett, Expedition, and EX FireRed & LeafGreen.