Dissidia Final Fantasy (ディシディア ファイナルファンタジー, Dishidia Fainaru Fantajī?) is an action RPG/fighting game developed and published by Square Enix for the PlayStation Portable as part of the campaign of the Final Fantasy series 20th anniversary. Information on the game was first released during the "Square Enix Party" event of May 2008. The game features characters from different Final Fantasy games and centers around a great conflict between the heroes and villains, as the god of discord, Chaos, tries to wrest control of their worlds from the forces of good. It was released in Japan on December 18, 2008, in North America on August 25, 2009, in Australia on September 3, 2009 and in Europe on September 4, 2009. It was then re-released as an International version in Japan, based on the North American port, as Dissidia Final Fantasy: Universal Tuning, on November 1, 2009. Dissidia was well-received commercially and critically, with positive reviews and sales of over 1 million copies worldwide.

A sequel titled Dissidia 012 Final Fantasy is planned for release in 2011, and will feature several new characters and gameplay features. 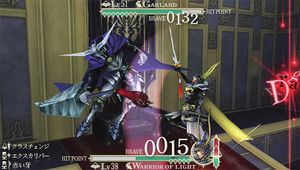 An early screenshot of the Warrior of Light fighting Garland.

Dissidia Final Fantasy's genre has been described as "dramatic progressive action" and its graphics are in three dimensions. It has wireless one-on-one multiplayer and fights revolving around the use of individual special skills of characters to do damage to opponents. Players can also customize their characters with equipment.

Character movement is fully functional within the three-dimensional field map. Characters are able to perform special maneuvers using the environment by pressing the Triangle button, similar in function to the Reaction Command feature of Kingdom Hearts II. Traps with a variety of ill effects can be found throughout the arena.

Similar to many fighting games, the aim is for the player to reduce their opponent's HP to zero. A character's offensive (and, to a lesser extent, defensive) power is shown in numerical form called BRV or "Bravery Points". Both characters start out with a set amount of BRV, and each must steal BRV from their opponent by attacking them with the basic "BRV attack" to add it to their own total and gain the upper hand. Players can then use the "HP attack" to cause direct damage to their opponent; HP damage is equal to the player's current amount of Bravery. However, once an HP attack is used, the character's own BRV is reduced to 0 and then slowly recovers to its starting amount. A character whose BRV total has been depleted (past 0 BRV and into the negatives) is forced into "Break mode", where, aside from not being able to cause HP and BRV damage (But being able to gain BRV), all attacks made against them cause critical damage and the opponent gets all of the BRV in the "Bravery Pool" (a number that can be seen at the bottom of the screen), massively boosting their BRV amount.

One main feature of the combat system is the "EX Gauge", which can be filled in a variety of ways, such as inflicting damage on opponents, taking damage from opponents, and obtaining EX cores scattered around the field of play. Once the EX Gauge is filled, the character can enter their "EX Mode", significantly increasing their power and enabling new attacks, including the "EX Burst", an unavoidable and very damaging special attack similar to the Limit Break mechanic seen in many games in the series. The player on the offense charges up the attack by following the on-screen instructions, while the player on the defense can reduce the amount of damage taken by continuously pressing the circle button. Once the EX Burst is executed, EX Mode ends. For the characters from the games that had a Limit Break system, their EX Bursts are based on their most powerful attacks (such as Cloud's Omnislash); for the other characters hailing from the games that did not have a Limit Break system, their EX Burst is more original.

In a gameplay mode exclusive to Western releases, the Arcade mode converts the game in a traditional fighting game, with all RPG elements removed and characters' abilities being stripped down to the basics to balance the playing field. Within the Arcade Mode, there are three tiers: Normal, Hard, and Time Attack; beating any tier of the Arcade mode will reward the player with PP (player points) and special items that can be used in story mode. All characters, including villains, are playable in Arcade mode; for example, Golbez, Sephiroth, Kuja, and Jecht are available for use in this mode from the start, but they still need to be bought via the PP Catalog for use in other modes.

The story revolves around two gods: Cosmos, the goddess of harmony, and Chaos, the god of discord. Creating a world from pieces of other worlds, they have been locked in eternal conflict, summoning several warriors to battle in a never-ending cycle of death and rebirth until the balance tipped in favor of Chaos. As the war seems to be nearing its end, the ten warriors of Cosmos band together to strike back at Chaos's minions and restore harmony.

Cosmos gives the ten warriors the task of retrieving the ten crystals that will help them defeat Chaos. They each set out on a journey called a "Destiny Odyssey," where their respective stories are told and interlink with one another. During their "Destiny Odysseys," the heroes encounter their personal villains, defeating them through epiphanies about themselves that help them obtain their crystals.

Following the "Destiny Odysseys" is the "Shade Impulse," where all ten warriors are in possession of their crystals, but arrive too late to save Cosmos, who is apparently killed by Chaos. The heroes begin to fade away, but are saved by the power of the crystals, allowing the heroes to use what time they have left to strike back against the villains and defeat Chaos once and for all. In the end, the warriors return to their respective worlds, allowing harmony to reign under Cosmos, who somehow survived Chaos's attack and has a new-found sense of faith in the future as there is still conflict in the world.

The game unites both protagonists and antagonists from installments of the main Final Fantasy series, their stories narrated by the first Final Fantasy game's Cid of the Lufaine (voiced by Bunta Sugawara in the Japanese version, and Rodger Parsons in the English version). Other than the gods and their champions, the player also deals with crystal-like dopplegangers called Manikins. The game has an overarching storyline that requires playing through all of the characters to complete. The game contains twenty-two total playable characters: eleven heroes and eleven villains, one of each representing Final Fantasy through Final Fantasy X, and two secret characters: a heroine representing Final Fantasy XI, and a villain representing Final Fantasy XII. Initially, only the ten main heroes will be playable in all gameplay modes; the ten main villains are playable in Arcade mode, but must still be unlocked for access in all other gameplay modes. All characters' lip movements are in-sync with spoken dialogue in both Japanese and English. Interestingly, in all Western releases of the game, no matter what language the game text may be in, the audio is always in English, with subtitles in the player's native language; there are no voices in any other language.

Character equipment can be customized, and they can gain EXP and Gil from battles.

Summons are accessible using Summon Stones. There are fifty-one different summons, each with a different effect on Bravery Points.

On April 6, 2007, Square Enix filed for United States trademark registration of "DISSIDIA"; the mark's relation to Final Fantasy was omitted. Some sites speculated this was an edition of Fabula Nova Crystallis Final Fantasy XIII. The title was connected with Final Fantasy when Square Enix introduced Dissidia Final Fantasy on May 8, 2007 with an official Japanese website. The game was produced by Yoshinori Kitase and directed by Yousuke Shiokawa and features music by Takeharu Ishimoto. Takeshi Nozue being the movie director.

Tetsuya Nomura is responsible for the character designs, which change much of the look and style of Yoshitaka Amano's illustrations. Nomura comments to the Japanese gaming magazine Famitsu that Tidus is designed to look younger than he was in Final Fantasy X to "match the design touch of the rest of the Dissidia" cast. Jecht was chosen instead of Seymour to be the villain representing Final Fantasy X because Seymour has little in-game interaction with Tidus, whereas Jecht, as Tidus' father, would prove much more suitable.

On May 8, for its western localization, director Takeshi Arakawa and producer Yoshinori Kitase announced that the release date for the Western world would be August 25, 2009 (starting in North America), and that it will include a number of tweaks, including re-adjustments in gameplay, new gameplay events, an arcade gameplay mode, a shortened tutorial, new moves for playable characters, and extra cutscenes featuring cameos from several other characters from the main characters' original games that do not appear in the Japanese version.

For the Dissidia Final Fantasy NA release, GameStop released the game with two additional covers for anyone who reserved it before it came out.

On August 24, 2009, it was announced that there will be an international version of the game. Named Dissidia Final Fantasy: Universal Tuning, this revision of the game will be a direct port of the North American version of the game, retaining all the extra features added, and was released in Japan on November 1, 2009. Both English and Japanese voices are available in battle, with the player deciding which language the characters will speak.

The Dissidia Final Fantasy Original Soundtrack was released on December 24, 2008, and is available in both regular and special editions, similar to the game itself. The main theme of the game is "The Messenger" by Your Favorite Enemies. In one interview with the developers, it was stated that the game contains twice the amount of dialogue featured in Crisis Core: Final Fantasy VII.

The tracks "Cosmos" and "Chaos - Last Battle 1" are also performed by Your Favorite Enemies. "The Messenger" is the main theme song of the game, with lyrics from both "Cosmos" and "Chaos - Last Battle 1." "Cosmos" features female vocals, while "Chaos" is dominated by male vocals. In YFE's documentary on the conception of the songs for Dissidia, lyricist and vocalist Alex Foster admitted that the lyrics have no direct connection to themes of the game; rather, he left it up to the listeners to interpret the lyrics based on their own thoughts and ideas. Other tracks are often remixes done by Ishimoto of past Final Fantasy music originally composed by Nobuo Uematsu.

Studio BentStuff published the Dissidia Final Fantasy Ultimania α as the initial reference guide for the game. Released on December 4, 2008, this book became part of the Ultimania series, which includes the Kingdom Hearts Ultimania α.

Suntory Ltd. also collaborated with Square Enix to create the "Dissidia Final Fantasy Potion" drinks which were released on December 9, 2008 in Japan to promote the game's release.

Best Buy had available when the game was released a desktop calendar for anyone who purchased the game.