Ditto is known as the resident shape-shifter in the Pokémon world.

In (Ancient) Greek the masculine adjective "dittos" (διττός) means "double", the neuter form of this adjective is the well known "ditto" implying the duplicate usage of certain things. "Ditto" is a slang word related to the Latin "dictum." Its use implies copying or reiterating an idea, this makes sense as Ditto's only attack is Transform, which allows it to "ditto" another Pokémon. Its Japanese name is Metamon, probably related to the words "metamorphose" and "monster."

Ditto takes the form of an amorphous blob with a simplistic face. Despite apparently not having a brain nor vital organs, Ditto acts and communicates like a normal Pokémon, and its pink body is lightning resistant.

Ditto demonstrates one of the most perplexing and amazing talents in the Pokémon world: Transformation. It is able to rearrange its cellular structure into that of another Pokémon nearby at will so that it both looks like that Pokémon and can wield its powers. It can do this with any Pokémon, no matter how large or complex, be it Onix or Wailord—Ditto can become large enough to resemble these giant Pokémon to their exact details. The way it can rearrange its cells to apparently expand in size to accommodate its forms as larger Pokémon forever baffles scientists studying it. Strangely, when a Ditto laughs while transformed, it cannot hold its transformation. This is a major weakness. It's worth noting that using Tickle in the Pokémon games will not cause Ditto to Transform back to its original form.

There are various intriguing properties that occur with some Ditto. First, some inexperienced Ditto who have not perfected their transformation abilities end up not transforming completely into whatever Pokémon they are trying to mimic, unable to change its retained simplistic face accordingly, making it look bizarre and artificial. Another uncommon Ditto property is that sometimes the individual Ditto involved has the inability to mimic the size of the Pokémon it transforms into. In these cases, when it does transform into Onix, it is still the size of a standard Ditto—small enough to fit in one’s lap, rendering the transformation useless for battle, as an Onix relies purely on its massive size & strength. Most astounding of all is a property that seems to break the limits of what Ditto is advertised to be capable of: Some Ditto can transform into inanimate objects roughly their size, objects that may not be Pokémon-related at all, such as a book or a small artillery cannon (as seen in the Pokémon Anime). This is further enforced by the Pokédex fact that it turns into a stone before going to sleep to avoid being attacked.

Ditto is found in the Red, Green, Blue, Yellow, Gold, Silver, Crystal, Firered, Leafgreen, and Emerald versions, all generally in the same area. In Emerald, if the player returns to the Fossil Maniac's house after the player beats the Elite Four and enters the newly-dug hole, there will be an abundance of Ditto there. In Pokémon Diamond and Pearl, Ditto can be (rarely) found on Route 218 with the aid of the PokéRadar.

Ditto, in terms of Pokémon battle, is purely a novelty, basically serving as an opportunity to have a Pokémon identical to the opponent (except for HP). Because its stats are readjusted to mirror the stats of the opponent, Ditto can end up being a menace to whatever it is battling, depending on type matchups of moves. But this does not happen often enough to warrant it in most professional players’ teams.

Ditto is generally not used for battling. It is mainly used for breeding with all but Legendary and baby Pokémon. This is very useful, especially for Pokémon that are rare and prominently male, prominently female, male-only, female-only, or genderless. Tyrogue's evolutions, Hitmonchan, Hitmonlee, and Hitmontop, are the types of Pokémon that are good examples of that, as Tyrogue and its evolutions are always male, and they are one-off Pokémon. Thus, you would need a Ditto and breed it with Hitmonchan, Hitmonlee, or Hitmontop in order to produce a Tyrogue. Ditto is also the only way to breed with other genderless Pokémon that aren't Legendary, like Voltorb. This applies to all but Legendary and baby Pokémon, as mentioned prior, with one exception. Ditto can also breed with one Legendary, Manaphy, to produce the pokémon Phione.

In the games, if the player runs into a Ditto, the player is advised not to defeat it swiftly, because when Ditto transforms into the Pokémon the player is using first, it gives more experience when defeated. However, this doesn't apply to all Pokémon. Some, such as a Caterpie or Magikarp, may give out fewer experience points than a normal Ditto. In fact, one of the easiest ways to catch a Ditto, followed by a way to catch Mew, is to have a non-legendary, easy-to-catch water Pokémon, and then use the Net Ball after weakening it.

Ditto can also be found in the Nintendo 64 game Pokémon Snap in the Cave Course. They will have transformed into Bulbasaur, however, but their faces will be simplistic like what is seen in the anime. They will revert to their normal forms if hit by Pester Balls.

In the Japanese version of Pokémon Diamond and Pearl it has been revealed that, if fainted while transformed, Mew or Ditto will still keep the moves they learned while transformed, thus making this very useful for breeding (in Ditto's case, not Mew's). Because Ditto can Transform into any Pokémon, except already Transformed Pokémon and Substitutes, it can have any moveset. Thus, a player can have their Ditto transform into Smeargle, who already knows the moves the player wants. Then, the Ditto will be defeated in battle. The player can breed this Ditto with a Pokémon and pass on the wanted moves to the offspring. Thus, any non-legendary, non-baby Pokémon can receive a custom moveset, without the player paying for valuable TMs.

Ditto makes a cameo in Super Smash Bros. Melee. In the VS Tournament mode (either winner out or loser out) you can scroll through characters before starting your next battle. But, by pressing L and R, you change your character to "Random" which is represented by a Ditto (as if it transforms into whatever character you end up using). It was also going to be a Pokémon inside the Pokéball item, but due to limitations (partly caused by the Ice Climbers), you can only get it with the Debug menu. However, the original transform idea is not present, leading to Ditto disappearing seconds after being released. Ditto also appears as a trophy.

In the Nintendo DS game Pokémon Trozei, Ditto plays a large role as a wildcard Pokémon; it can Trozei with any kind of Pokémon. It's immensely useful to Trozei with rare Pokémon after the player has made Continuous Trozei. Also, lining up Jammer Balls with Ditto are the only way to get rid of them during boss fights with Generals.

In Pokémon Snap, Ditto will appear in the disguise of other Pokémon, namely, Bulbasaur. The player must figure out a way into tricking the "Bulbasaur" into revealing its true nature to obtain a Ditto picture.

Ditto is found in the Buried Relic dungeon. Transform does not copy the opponent's moves or stats; instead, it gives the user the appearance of a random Pokémon found on that floor. As it only has 1 PP, allowing only one use per dungeon without restoring items, it's only options after using Transform are to struggle or use the basic tackle attack exclusive to Mystery Dungeon.

For some reason, Ditto seems to have connections in the Red and Blue versions to the glitch Pokémon Missingno. and 'M. After an 'M is caught in the game during a battle, there will be an invisible Pokémon that will still be battling your Pokémon. When that is caught, the screen will say "you caught Ditto" (It might be another 'M). Once it is caught it won't be invisible anymore. If a player-controlled Ditto uses Transform to change into the invisible Ditto, its image will turn into a Missingno.'s image, but it will actually still be a Ditto.

Since the Missingno. was not a Ditto, it does not have 'Transform'. This means that when linked into the Pokémon Stadium 2 game, the Missingno. which had been turned into a Ditto ends up keeping its original attacks. The funny thing about this is that even when this bizarre Ditto launches an attack, unless it was "Transform", the animation attack goes flying and strikes the opponent while the bizarre Ditto is shown still standing around doing its usual taunt as if it was not even doing anything at all.

A famous glitch in Pokémon Gold and Silver can be used to Transform a Ditto into a Smeargle, allowing it to use Sketch to permanently gain an attack used on it. Ditto can then breed the attack into its (non-Ditto) offspring. In Pokémon Emerald and similar games of the generation where Ditto and Smeargle appeared, this was fixed, meaning that a Ditto using Sketch will always fail and a Smeargle will find it impossible to Sketch Transform.

Ditto first appeared in the Pokémon Indigo League series, helping to run a theater with its trainer, Duplica (Imite in Japanese version). Ditto has trouble transforming into other Pokémon, as it cannot alter its face to the same as his source.

In the Orange League, Ash encounters a Ditto in his battle with Drake, the leader of the Orange League. Ash pits Pikachu against Ditto, and Ditto Transformed into Pikachu. A close match ensued, with Pikachu winning.

In Johto, Ash and company run into Duplica again, but this time Duplica has a second Ditto that stays the same size even if it copies a very large Pokémon, like Onix. That Ditto was nicknamed Mini-Dit.

In the CD drama "It's a White Tomorrow! Rocket Gang!", a Ditto belonging to Jessie, James and Meowth's field assistant, Mondo, is an essential part of the plot. It is traded to Jessie and James in exchange for Meowth. This Ditto tends to transform into Pokémon according to words his trainer says that merely sound like the names of actual Pokémon, and its failure to transform into the correct Pokémon ends up causing Jessie and James to fall straight into Beedrill territory.

Ditto is one of the members on Blue's team in Pokémon Special. As a master of transformation, Blue uses Ditto extensively in her schemes, such as morphing over her face to disguise her appearance, camouflaging into its background for subterfuge, as well as forming a protective shield with Blue's umbrella.

Ditto is seen later used by Team Rocket, to lure Crystal and Eusine away from Suicune, and smother them when discovered. It was, however, defeated by Crystal's Hitmonchan.

Duplica and her Ditto are seen in The Electric Tale of Pikachu. Finding Ditto appealing, Misty decides to capture one of her own, but the plan is called off when Pikachu goes missing. Ditto also featured in a minicomic in which it transforms into Ash, harasses Misty and thereby getting Ash into a lot of pain. 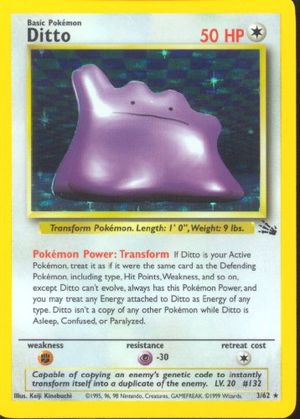 Prior to the release of EX Delta Species, Ditto has seen several sporadic cards throughout the card game’s lengthy history, all as Basic Colorless Pokémon: