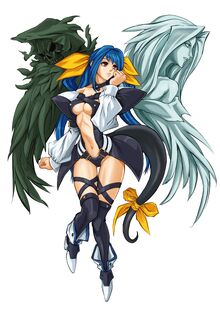 Dizzy is a character in the Guilty Gear fighting game series, making her first appearance as a boss of the second game, Guilty Gear X: By Your Side. She must be unlocked in order to be playable in that game, though in subsequent games she is freely playable from the beginning. Despite the fact that she is half-human and half-Gear, all Dizzy desires is peace for herself and for humans. She currently resides with May and Johnny as a crew member of the Jellyfish Pirates.