Dodrio (ドードリオ, Dōdorio, Dodorio in original Japanese language versions) is one of 493 fictional species from the Pokémon franchise. Its name is a portmanteau of the words Dodo, the extinct flightless bird, and trio, in reference to its three heads.

Dodrio resembles an ostrich, with sharper beaks and two extra heads, each of which wears a particular expression and a black crest. It has a fan-like tail and long, powerful legs. Dodrio's movement is reminiscent of the roadrunner. In Diamond and Pearl, Male Dodrio have black necks while female Dodrio have white necks. The shiny form has green feathers, not brown.

As the evolved form of the two-headed Doduo, Dodrio features no fewer than three heads, which are its most remarkable feature. The third head is said to be formed by one of Doduo's heads splitting during evolution. Each one of the heads constantly expresses a different emotion: joy, sadness, and anger. In this respect, Dodrio shares a common theme with other triple-aspected entities, including The Fates of Greek mythology (length, course and end of life) and the Runespoor, a three-headed serpent featured in Fantastic Beasts and Where to Find Them (the planning head, the dreaming head and the critical head).

Dodrio's three heads are both a great asset and a hindrance to it. On one hand, having three heads gives Dodrio great versatility: it can collect more information from its surroundings and develop complex plans. It can remain alert at all times by keeping watch in three different directions, and one head can remain awake while the other two sleep (this, combined with the Early Bird ability, suggests that Dodrio may keep the best watch out of all Pokémon). It takes only one head to eat for the hunger of all three to be satiated. Dodrio even has three sets of hearts and lungs to match its heads, granting it extraordinary stamina while running at high speed.

On the other hand, a Dodrio's three heads are commonly known to squabble amongst themselves, probably due to each one having a different attitude. Even when the three heads are working together in harmony, a Dodrio runs the risk of thinking too much and driving itself completely immobile. Rounding up Dodrio's disadvantages is it struggles to fly. It can, however, run in speeds approaching 40 miles per hour. Even though Doduo's top speed is 60 mph, Dodrio is actually much faster..

Dodrio inhabits grass-covered plains across which it races. It is well-adapted to dry and arid climates.

Within the game environment, Dodrios are usually used by Bird Keepers and Triathletes practicing in running. In Pokémon Ranger, a Dodrio is the partner of the Fall City Ranger Leader Joel. Dodrio evolves from a Doduo at level 31.

In Pokémon FireRed, Pokémon LeafGreen and Pokémon Emerald, having a Dodrio unlocks a two-player mini-game called Dodrio Berry-Picking, which utilizes the Wireless Adapter. In the game, the players have to direct their Dodrio's three heads to catch falling Berries. One key corresponds to each head.

In the Pokémon Stadium games, Dodrio Mode is an extra feature unlocked by successful completion of the main game twice. Like Doduo Mode, it speeds up a Pokémon game played through the Transfer Pak. Doduo Mode doubles the game's speed while Dodrio Mode quadruples it.

Dodrio's first appearance in the anime is briefly in the very first episode, where it has the role of a rooster, seen crowing on the morning Ash is to get his first Pokémon.

A Dodrio has appeared in episode #33, The Flame Pokémon-athon, where it belongs to a Pokémon Trainer named Dario. Dodrio takes part in a Pokémon racing contest, but loses to a Ponyta (which evolved into a Rapidash towards the end of the race) ridden by Ash, despite Team Rocket's attempts at cheating in its favor. It ends up pecking Team Rocket, who Dario blames for losing.

Violet City Gym Leader Falkner also owns a Dodrio. He uses it in his battle against Ash, where it possesses the Fly move despite not being able to fly; this is because it can jump so high it is as if it is flying. It fights and is beaten by Ash's Pikachu.

Gary Oak caught a Doduo, which he evolved into a Dodrio.

Yellow's Doduo evolved into Dodrio in Volume 7 of Pokémon Special. It was seen again in Volume 12, managing to save Pika and Chuchu from a surfing accident. 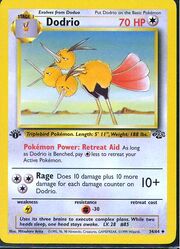 Dodrio is a somewhat prolific figure in the Trading Card Game. It has made these appearances: