Doduo (ドードー, Dōdō, Dodo in original Japanese language versions) is one of 493 fictional species from the Pokémon franchise. Doduo's name is a portmanteau of the words dodo, the extinct flightless bird, and duo, in reference to its two heads. In the beta version of the English version of Pokémon Red and Blue, Doduo's name was simply Dodo, a direct translation of its Japanese name.

Doduo resembles an ostrich, with sharper beaks and an extra head. Its torso and heads are round and covered with brown feathers, while its beaks and long legs are a light yellow color. Its long necks and beady eyes are black. In Diamond and Pearl, female Doduo have tan necks, while males' necks are black. This is also true for Dodrio.

This bird slightly resembles a road runner, a land bird that can run fast, and rarely flies. It's notable that Doduo's evolution, Dodrio, has on the top of all the three heads the same dark feathers. Even Doduo's feet are similar to the road runner's, and leaves crosslike traces as well.

Doduo's long necks and legs may make it appear similar to an ostrich or roadrunner, but it may also be based on a kiwi, a bird native to New Zealand.

Doduo features two heads. The second head is said to have been formed by a sudden mutation thousands of years ago. Both heads normally contain identical brains, although rare cases have been observed where a Doduo has two distinctly different brains.

Although Doduo supposedly has short wings and has limited flying abilities, it is much more proficient at running with its long legs. Doduo's tracks are huge and very distinctive.

Doduo's two heads are both great assets and a hindrances. On one hand, having two heads gives Doduo great versatility: it can collect more information from its surroundings and perform more actions at once. It can remain alert at all times by keeping watch in two different directions, and one head always remains awake while the other sleeps. On the other hand, a Doduo's two heads are commonly known to squabble amongst themselves, despite the fact that each contains an identical brain.

It gains a third head, and all three heads acquire distinct personalities, when it evolves into Dodrio.

Doduo inhabits and races across grass-covered plains at 60 mph. It is well-adapted to dry and arid climates.

Doduo first appears in Pokémon Red and Blue, and eventually evolves into Dodrio. They appear in Pokemon Yellow, Pokemon Gold and Silver, and in Pokemon Ruby and Sapphire, and Pokemon Emerald.

Doduo are also found in Pokémon Snap, Pokemon Ranger, and Pokémon Trozei, as well as the pinball games.

Doduo's first appearance was a cameo at Prof. Oak's laboratory in Showdown at the Poké Corral. This Doduo belonged to Gary Oak. Gary's Doduo eventually evolved into a Dodrio.

In Bad to the Bone, Otoshi tried to fight off Team Rocket with a Doduo, but he was failing miserably until his Marowak decided to return.

Prior to her appearance in Pokémon Special, Yellow is given a Doduo that eventually evolves in Volume 7. The person who gave her Doduo is revealed in Volume 9 to be her uncle, Fisherman Wilton. 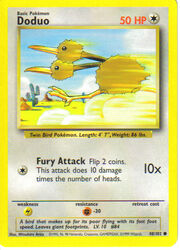 Doduo has appeared in the Pokémon Trading Card Game first in the Base set. It also appears in Aquapolis. There are not many Doduo in the card game.