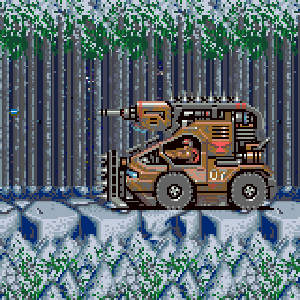 It is a heavily armored tank with a mobile cannon on its top and a spiked snow plow on its front. It is a miniboss in Stage 5. As the player sets foot on the beginning of the industrialized section of the level, the first Dogra will enter from the right side of the screen. The vehicle will advance some distance, make a stop, aim the cannon toward the player's current position, and open fire. After a certain period of time has elapsed, the tank will start advancing once more in order to crush the player with its spiked plow. Shortly after the first tank has been destroyed, a second one will take its place.