Dr. Mario is a game released for the Nintendo Entertainment System, Famicom, Game Boy and as a Classic NES Series for the Game Boy Advance. The game was later ported to the Satellaview. The Satellaview version was ported, with Tetris, to the Super Nintendo Entertainment System as Tetris & Dr. Mario. A newer version was ported to the Game Boy Advance as Dr. Mario/Puzzle League. 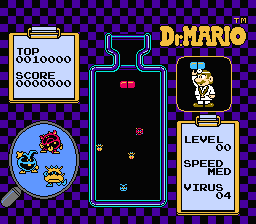 A gameplay image of Dr. Mario.

Like all Tetris-style puzzle games, Dr. Mario involves maneuvering and stacking falling blocks (in this case, pills). These pills come in a multitude of colors, and for a very good reason. There are three different colored viruses (red, yellow, and blue) that Dr. Mario must do away with. The first level contains just three viruses, one of each color. Dr. Mario must stack three same colored pills on top of, or in a horizontal row with viruses of the same color to destroy them. The next level is reached once all the viruses are destroyed. Each higher level contains more viruses and the pills move towards the bottom of the screen at a quicker pace. The game features twenty levels.