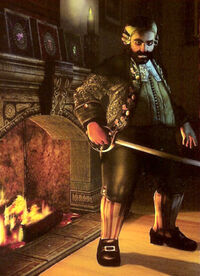 Maximillian, a learned medical doctor, lectures at many universities within the United States. Although not a famous scholar, he is certainly respected by both his students and peers. Maximillian is a somewhat portly man in his mid-fifties. His wife passed on years ago, after fighting consumption for many years. His three children, themselves now adults, visit him from time to time. More often than not, though, he remains alone in the family estate, left to his own devices. His children fear for his sanity—they believe is it unhealthy for an old man to be left along in such a large house. They may be right...

Above text taken from game manual.