The name Dragonair is a portmanteau of "dragon" and "debonair", referring to Dragonair's dragon-like form and their affable and suave nature. The last syllable may also be derived from "air", referring to Dragonair's ability to become airborne, or possibly even the "air" being a feminine-sounding suffix. Their English name was originally going to be "Dragyn". In the Japanese version, "Haku" in this case means older brother as they are the elder form of Dratini. "Haku" can also mean white, creating the possible interpretation of the creature's name as "white dragon".

Dragonair look like sea serpents, thus having some dragon-like characteristics. They have a long, sleek, blue and white body. They have a small horn on the forehead and two wing-shaped protuberances on the sides of the head which are often said to be ears, but are in fact wings, as evidenced in the short film preceding Pokémon: The Movie 2000. They have a blue orb placed at the neck and another two near the tip of the tail, similar to the rattle on a rattlesnake.

Dragonair live in large bodies of water, like lakes or the sea. They store an enormous amount of energy inside their bodies. This energy seems to manifest itself in two distinct fashions. First, even though they lack large wings, Dragonair has been seen flying with the wings on the side of the head greatly enlarged.

Furthermore, a Dragonair can discharge energy through the crystalline orbs on its neck and tail to envelop itself in a gentle aura. This aura, which makes its body shine slightly and gives it a mystical appearance, is said to enable the Dragonair to control the weather in the immediate area and change it in a matter of minutes.

Even though Dragonair are known best for their ability to control the weather, they do not naturally learn any moves that change the weather in battle (such as Rain Dance, Sunny Day, or Hail).

In Pokémon Red and Blue, Dragonair are not found in the wild, but they can be evolved from Dratini, which are available in Pokémon Red, Blue and Yellow. They can learn strong attacks such as Ice Beam/Blizzard, Thunderbolt/Thunder, Flamethrower/Fire Blast and Water Pulse/Surf. In Pokémon Yellow, FireRed and LeafGreen, Dragonair are found by fishing in the Safari Zone, although they are rare. In Pokémon Gold, Silver and Crystal, Dragonair are found on Route 45 and in the Dragon's Den. In Pokemon Diamond and Pearl, Dragonair can be found by fishing inside a waterfall with a Super Rod near the peak of Mt. Coronet.

Dragonair's stats are about average, but they have a great array of elemental resistances thanks to their Dragon type. Sometimes trainers prefer using Dragonair over the evolved Dragonite because of Dragonite's double weakness against Ice. As well as this, Dragonair has the Shed Skin ability, allowing it to recover from status ailments without the use of items

Dragonair first appeared in the banned episode, The Legend of Dratini. The warden of the Safari Zone was protecting it. Clair's Dratini evolved in a Dragonair in Beauty is Skin Deep.

In An Olden Pond, a Dragonair was living in a lake that a businessman once planned to built a luxury resort on.

In Magical Pokémon Journey, a male friendly Dragonair appears in "The Legendary Articuno" as he flies through in the snowing sky. Pikachu, Clefairy and Jigglypuff ask him where Articuno's hideout is, Dragonair knows where she is so he told them she lives in the "snowcones" house where they could find Hazel, Almond and Squirtle. Although a male Dragonair, he has a crush on a female Articuno (she wears an apron). In Pokémon Adventures, Lance owns several Dragonair. 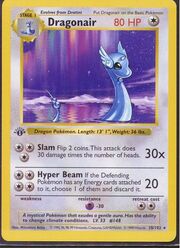 Dragonair, as seen in the Pokémon Trading Card Game