The name Dragonite' is a reference of the word draconite, the valuable jewel thought to be inside dragons' skulls. Its name could also be a portmanteau of "dragon" and "knight". Its Japanese name, Kairyu, literally means "Great Dragon" (海竜, kai = great, ryu = dragon).

Dragonite's appearance is notably different from that of its previous forms (Dratini and Dragonair). As Dragonite, it is now a golden bipedal, mammalian dragon with a beige underbelly that extends from the top of its neck to the tip of its tail. Along with already being a Dragon-type, it has now gained the secondary Flying-type, growing wings. It has a small horn on the top of its head, along with slightly "S" shaped antennae. However, much like its previous forms, Dragonite still has a gentle and somewhat innocent appearance.

Dragonite behavior is inspired by both the mythical dragon (in that they can fly, breathe fire, and lay eggs), and by real-world dolphins (in that they use echolocation, have a strong connection to the sea, and possess near-human intelligence). Also, like the dolphin, they have been noted to save drowning swimmers and threatened sailors. They even have the ability to release electric charges from their antennae. How they do so is unknown, but it may be because the fur on their antennae allow a powerful static charge to build. Dragonite are very loyal to any trainer they find worthy of acceptance. They are calm, gentle, and intelligent creatures, but when threatened can put their pudgy bulk to good use. Dragonite seem to have more advanced vocal abilities compared to other Pokémon in that they make several different types of calls, rather than just saying their name. They also have incredible flight capabilities and are considered some of the fastest flying Pokémon in existence despite the size of one's wings compared to the rest of its body. It makes a loyal friend to humans.

Dragonite cannot be caught in the wild in any game, except using the Mew Glitch and battling the trainer in cycling road with a level 33 Weezing. The common way to get one is to evolve it from Dragonair, the evolved form of Dratini. Dratini evolves into Dragonair at Level 30 and into Dragonite at Level 55.

In Pokémon Gold, Silver and Crystal Dratini can be caught at the Dragon's Den, north of Blackthorn City. Additionally, Dratini can be purchased with winnings from the Game Corner game in Goldenrod City. Low-level Dragonair are sometimes, but rarely, encountered by fishing on a pond in the mountain trail south of Blackthorn.

In Pokémon Red, Blue, and Yellow, Dragonite had the highest attack rating of any Pokémon in the games. Even after those games, it was still a fearsome species, with the attack rating in the 98th percentile, both special attack and special defense in the top 20% of all Pokémon, and no ability below the 69th percentile. As a result, Dragonite are popular in link battles. Dragonite have the Inner Focus ability, which prevents them from flinching from any attack (except for the Focus Punch attack, which is an exception to normal flinching rules). Like Salamence, Tyranitar, Metagross, and Garchomp, Dragonite's total base stats are extremely high for a nonlegendary, equal to those of Mew, Celebi, Jirachi, etc.

A Dragonite is also found in the Nintendo 64 game Pokémon Snap in the Valley Course. It will appear when several pester balls in a row are thrown into the whirlpool close to the end of the course.

In Pokemon Diamond and Pearl, Dragonite is used by the Tower Tycoon the first time you fight him at the Battle Tower.

Despite being a Flying-type Pokémon, Dragonite can't learn "Fly" from HM 02 in the Red, Blue and Yellow versions of the RPG, but, since the 2nd generation, Dragonite can learn it, allowing it to Fly over the world. You can however trade a Dragonite to Gold, Silver, and Crystal version teach it HM 02 Fly, then trade it back. Dragonite will now be able to use fly.

Dragonite appears as the "Dragonite Bus" in Pokémon Ranger, which the protagonist uses from time to time to quickly get to certain ranger bases for emergencies.

A Dragonite was first seen in shadow in the episode "Mystery At The Lighthouse". In this episode, Bill explains how he seeks rare Pokémon, and is currently searching for one that he heard across the sea. Although it appears, Team Rocket scares it away before it is more than shadow. Dragonite's cries sounded like the cries of a whale in this episode, and its cries were later reused for Lugia in the second movie. It was much larger than normally portrayed, at least as big as Bill's lighthouse. This episode very closely resembles the story The Fog Horn, in which a giant monster is lured to a lighthouse when it mistakes the lighthouse's fog horn for the call of its kind.

In the Pokémon movie "Mewtwo Strikes Back" starring Mewtwo and Mew, a Dragonite serves Mewtwo as a messenger who delivers Mewtwo's invitation to Ash and friends. This time Dragonite appeared no larger than a man.

It was next seen in the Orange Island episodes of the animé (episodes "Hello Pummelo" and "Enter the Dragonite"). Ash had to beat its owner Drake to win the Orange League. This Dragonite was Drake's powerhouse (strongest Pokémon, to be exact), and was thus, very tough and beat all but one of Ash's team. However, Pikachu manages to defeat it by using a full power Thunder attack.

Lance of the Elite Four owns a Dragonite, as seen when he appeared at the Lake of Rage and during the battle between Groudon and Kyogre. There is also an image of him with Dragonite in "The Legend of Thunder".

There is also a Dragonite (seen in four concurrent episodes) guarding the Dragon Fang in Blackthorn City, which is under the control of Team Rocket for a while.

In the special episode, "The Mastermind of Mirage Pokémon", Professor Oak used one to help Ash and the others defeat the mirage Mewtwo.

Besides these appearances, they have also played roles in episodes 93 (Bye, Bye, Psyduck!), 123 (Illusion Confusion), 176 (Imitation Confrontation), 237 (Talkin' About An Evolution), and 238 (Rage of Innocence).

In Pokémon Special, Lance, leader of the Elite Four, has a Dragonite. 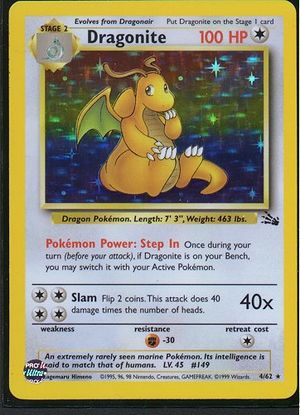 Dragonite, as seen in the Pokémon Trading Card Game

Dragonite have made appearances on all the following card decks. In each case it is a stage-2, colorless-type Pokémon unless otherwise noted:

A promotional Dragonite card was handed out at theatrical showings of Pokémon: The First Movie. It can be remembered by its Special Delivery Pokémon Power.

Its Dark card is referred to as "The God of Destruction" in the Pokémon trading card game on Game Boy.

Dragonite was one of the Legendary Pokémon cards in Pokémon Trading Card Game, and featured the same (albeit weaker) Slam attack as the Fossil version, as well as the Pokémon Power Healing Wind.

Dragonite appears as a Pokémon-ex in the third-generation set EX Dragon Frontiers.