Dratini (ミニリュウ, Miniryū, Miniryu in original Japanese language versions) is a Dragon Pokémon with a white circle-shape on its forehead. It is #147 in the National Pokédex. Dratini can be found in Pokémon Red, Blue, Yellow, Gold, Silver, and Crystal just by fishing with a Good Rod or Super Rod.

The name Dratini is a combination of dragon, tiny and possibly mini, or teeny, which is an informal alteration of tiny, despite Dratini being born at almost 6 feet in length. Even so, Dratini's Japanese name Miniryu contains the word mini meaning small, and ryū, Japanese for dragon. Its English name was originally going to be Dragoon.

Dratini is a mythical serpent Pokémon. It has two developing wings at the sides of its head, which grow to be enormous as it evolves. Dratini is possibly related to a snake and a giant baby dragon, as it lacks arms or legs and sheds its skin. Dratini are born large, as long as 5'11"; and as they shed their skin, they grow larger.

Dratini were thought to be purely mythical creatures, but they were discovered to be real by a fisherman, or so the story is told. Dratini's color suggests that it can camouflage itself in deep waters. They live in colonies in the ocean in limited numbers and fetch a high price as Pokémon to be used for battling.

Dratini have a massive amount of energy rapidly increasing inside of their bodies, hence, they have great strength which grows exponentially as they evolve.

In Red, Blue, and Yellow, as well as FireRed and Leafgreen Dratini can be found by fishing in the Safari Zone, but rarely. Dratinis can also be purchased at the Game Corner.

Both Dratini and Dragonair can be found in the Dragon's Den in Blackthorn City|Blackthorn City from the Gold, Silver, and Crystal games. In Crystal, if one makes a return visit (after receiving Rising Bagde from Clair) to the Dragon Shrine's Dragon Master and talks to him, one will receive a special Dratini that knows Extremespeed.

In Pokemon Diamond and Pearl, Dratini can be found by fishing inside a waterfall with the Super Rod near the peak of Mount Coronet.

Dratini is quite a sought-after Pokémon in the video games due to its powerful evolved form, Dragonite. Dratini evolves to Dragonair at level 30, and then into Dragonite at level 55. This prolonged evolution takes patience.

Dratini are also found in the Nintendo 64 game Pokémon Snap in the Valley Course, though they appear somewhat rarely.

Dratini first appeared in the episode "The Legend of Miniryu". This episode is set in the Safari Zone, and sees Ash and the Safari Warden protect a Dragonair and Dratini. This episode was banned outside of Japan (except Hong Kong and Taiwan) due to the Warden and Team Rocket threatening several characters with a gun. The only hint the rest of the world has to this missing episode is footage lasting less than a second in the Pokérap when Dratini is mentioned.

References to this episode have been made in the dubs of other episodes, such as Team Rocket's reason for wanting to steal Duplica's Ditto (Quote James' famous line, To transform it into the Pokémon we've never been able to capture, Dratini!). Also, Ash's capturing of 30 Tauros occurred in this episode.

Later, Blackthorn Gym Leader Clair has a Dratini, which later evolves into Dragonair, in a battle with Team Rocket.

In the Pokémon Special manga, Dratini was seen in a flashback of Lance's as a Pokémon harmed by human industrialisation. This motivated Lance to formulate his plot to destroy humanity many years later. 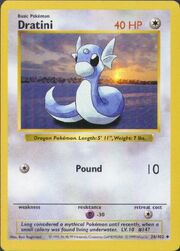 Dratini, as seen in the Pokémon Trading Card Game

Dratini first appears in the Base set; the Dratini card is rather feeble, only capable of doing 10 damage and only able to withstand 40 HP of damage before being Knocked Out. However, Dratini was necessary to use the powerful Dragonair card.