Drowzee (スリープ, Surīpu, Sleepe in original Japanese language versions) is one of 493 fictional species from the Pokémon franchise. Drowzee's name comes from the English word drowsy, which reflects on the fact that Drowzee's primary ability is to put foes to sleep. The "-zee" comes from the sleeping phrase "ZzZzZ". Its French name, Soporfik, is a reference to soporific (in French, "soporifique"), meaning sleep-inducing. Its Japanese name, Sleepe, is a corruption of the English word sleep.

Drowzee can also be identified with the Japanese demon Baku. It is a creature with a tapir's trunk, body and color pattern with a hunger for dreams, traits that characterize Drowzee.

Drowzee's original biology was based on the tapir. Drowzee's first appearance was in Pokémon episode #27, "Hypno's Naptime" In the episode, the Pokédex stated that Drowzee, had evolved from the fictional "dream-eating Tapir." However, its nature is much unlike the real-world animal it was based on.

Drowzee eats dreams; in order to eat, it must put its prey to sleep. A nightmare or night terror will give it indigestion, and it prefers the dreams of human children to those of adults or other pokémon. Drowzee's appearance and dream-eating behavior are inspired by the Japanese folkloric creature baku.

Drowzee is psychic, but it has limited abilities, compared to other Pokémon; it does not display telekinesis, for example. However, its telepathy allows it to detect people who are asleep, even while asleep itself.

Drowzee's memory when it comes to dreams is eidetic, and it has the ability to show anyone any dream it has eaten. If one thinks he/she had a good dream, but is unable to remember it, it was possibly eaten by a Drowzee.

Drowzee has very high special defense, coupled with decent HP which makes it able to withstand special attacks easily. Enemies have to resort to physical attacks to hurt it. Drowzee has one ability, Insomnia. This ability prevents it from falling asleep. From Diamond and Pearl onward, it may also carry the ability Forewarn, which warns the player about the foe's move with the highest unboosted base power.

Drowzee's first appearance was episode #27, "Hypno's Naptime", best remembered as the episode where Misty acquires her Psyduck. Drowzees were being used as a sleep aid for members of an upscale Pokémon appreciation society in HopHopHop Town. However, one of the society's Drowzees evolved into Hypno, and was accidentally hypnotizing local children into acting like various Pokémon. It is revealed that Drowzee's sleep effects can cancel out Hypno's hypnosis, so another Drowzee from the Pokémon society must revert the children back to their normal state. An unnamed trainer in the anime had a Drowzee called Otis.

In the Orange Islands, Team Rocket 2 (aka Cassidy and Butch) used Drowzee for their second plot after the Breeding Center Scam. They transmitted strange and sinister radio waves that were capable of overpowering the minds of Pokémon all over Mandarin Island, causing them to turn feral and vicious, forcing Pikachu and Togepi to attack them in a very hostile manner. Next they join other nasty Pokémon that fell to the same influence and attack Ash and company. Next, they meet up with Officer Jenny and a Gastly. She tells Ash and company that there have been numerous reports that Pokémon were mysteriously turning on their trainers and disappeared. She also declares that Gastly is a ghost-type Pokémon and have immunity to psychic attacks. Jessie and James also lost their Pokémon, including Meowth to Team Rocket 2 inside a radio tower. Unexpectedly, Team Rocket, Ash and others assemble an alliance to launch a surprise attack against their greatest foes. Officer Jenny and her Gastly fought gallantly. Ash had a plan! He was to coax Pikachu in a life-risking attempt to destroy the machine that artificially manipulated the Pokémon's minds. When Pikachu's Thunder attack Ash, the machine was finally destroyed!

However, Team Rocket 2 did not yet admit defeat and planned to once again take control of all the Pokémon on Mandarin Island. Ash and Team Rocket had no choice but to join forces again and battle against Team Rocket 2 and their Drowzee. When the battle was nearly at an end, Drowzee performed an attack called Metronome. Togepi was also doing the Metronome and before Pikachu could Thunderbolt Drowzee on Ash's command, it created a massive blast that finally destroyed the radio tower. Team Rocket 2 was defeated once again and sent back to jail. 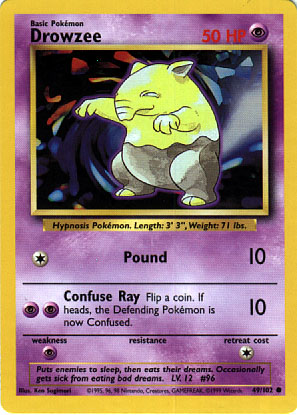 Drowzee has appeared in the Pokémon Trading Card Game first in the Base Set.