Dugtrio's name combines dug, the past tense of the English verb dig, and trio, a group of three.

Dugtrio are mole-like creatures. The tops of its heads are rounded, and its thin skin is covered with short brown fur. It has two small black eyes and a large roundish pink nose on each head. Interestingly, to date, no one has ever seen the entire body of a Dugtrio or its unevolved form Diglett. If seen above ground, it usually only sticks its body out of the ground about 2 feet, 4 inches (0.7m). Therefore it is impossible to know Dugtrio's true size. Some believe it has legs that it uses to dig, while others believe it is limbless and instead burrows like a worm or snake. An interesting thing to note about Dugtrio (and Diglett) is that they learn Cut, Scratch, Slash, Aerial Ace, Sucker Punch and Night Slash. This seems to support the theory that they have arms/claws.

Dugtrio, like Diglett, appears to be very similar to the artificial moles used in Whac-A-Mole arcade games.

Dugtrio is unusual in that, like Magneton, it is simply three members of its pre-evolutionary species, Diglett, irreversibly joined. The three heads actually split from one Diglett during evolution, so all three think exactly alike. Working together, the three heads allow Dugtrio to dig down to 60 miles (97 km) below sea level, where the soil and rock is very hard. While doing this, Dugtrio is able to trigger earthquakes. Although Dugtrio is composed of three Diglett, it weighs as much as 30 Diglett.

Dugtrio is often used as a revenge Pokémon in competitive battling. Revenge Killing refers to sending out a Pokémon after one has been fainted so that the Pokémon does not have to switch in directly to an attack. Dugtrio is one of the best revenge killers in the game because it has the Arena Trap ability (which prevents the foe from escaping) coupled with its high speed, which is a deadly combination. It is often given a choice band because of its somewhat low attack. Dugtrio was an overused Pokémon in the metagame for the advance generation and it continues to be so with Diamond/Pearl.

Dugtrio are also found in the Nintendo 64 game Pokémon Snap in the Tunnel Course. Diglett are seen popping their heads around a solitary Pikachu, and as pictures of Diglett are taken, more Diglett will appear. Eventually, Dugtrio will appear for photographing as well. A large mountain in the shape of a Dugtrio can be photographed at the start of the Valley Coursee as well. Snapping this will count as one of six Pokémon signs throughout Pokémon Island that need to be snapped in order to gain access to the seventh course.

A Dugtrio plays a minor character in Pokémon Mystery Dungeon, asking for the player's help to rescue their son from a raging Skarmory atop Mt. Steel. This Dugtrio is an avid traveller and often tells stories of their travels to their Diglett son, who holds them in high regard:

More often than not, they tend to forget that they're underground while speaking to people, and spend a few seconds popping up at random spots saying "Hah!" in attempts to appear face-to-face with whoever they're talking to.

In the Pokémon anime, Diglett and Dugtrio first appear in Episode 31, Dig Those Diglett!, in which a large herd of them are attempting to stop the construction of a dam. When Pokémon trainers recruited to fend off the Diglett attempt to call their Pokémon out of their Poké Balls, the Pokémon protest by refusing to come out, apparently supporting the Diglett's efforts. The Diglett eventually succeed in their efforts by using Team Rocket to destroy the partly-constructed dam.

In Episode 116, The Underground Round-Up!, a group of Dugtrio and Diglett are used by Poncho, a Diglett Rancher, to herd troublesome Electrode away from a city into the wild by using underground tunnels. Poncho only used his Dugtrio to take out Team Rocket's Electrode Eliminator.

Dugtrio next appears in Episode 209, Got Miltank?, in which it accidentally leads Ash Ketchum, his friends, and Team Rocket to a natural sanctuary for wild Pokémon where a Miltank heals injured Pokémon, such as Ash's Cyndaquil, that are brought to it by Dugtrio.

A Dugtrio is used when Ash is battling in the Hoenn League finals in Episode 405, A Judgment Brawl!. In this episode, Ash's opponent uses a Dugtrio to create a whirlpool of sand with the move Sand Tomb, forcing Ash's Pikachu to concentrate on escaping instead of battling.

In Volume 3 of Pokémon Special, Giovanni is seen to have a Dugtrio as a part of his Ground-type team. It was used to shatter the opening mechanisms on Red's Poke Balls, preventing him from releasing his Pokémon. 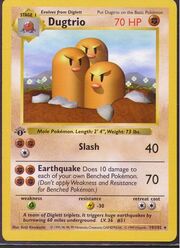 Dugtrio was found as Stage 1 Ground-type cards in the Base Set, Team Rocket (as Dark Dugtrio), Gym Challenge (as Brock's Dugtrio), Expedition, Skyridge, EX FireRed & LeafGreen, and in the EX:Crystal Guardians.