Duke Nukem II is the sequel to Duke Nukem I, released in 1993. This time around, the evil Rigelatins set out to enslave planet Earth and all the human race. During this attack they kidnap the eponymous hero, Duke Nukem while he is on a talk show advertising his new book: "Why I'm So Great". Duke breaks free to save the world once again.

Duke Nukem II is a side-scroller like the original, except with many new features and more interactivity. The player's goal is to proceed through the levels, taking advantage of the weapons, health items, and power-ups.

The game is very similar to the original, with improved graphics, sloped surfaces and the notable ability to fire upwards and downwards.

Duke Nukem is on foot throughout most of the game, but some levels have him inside a vehicle. The game is split into four episodes, each consisting of 8 levels. In the last level of each episode, the player faces a Rigelatin as a boss. 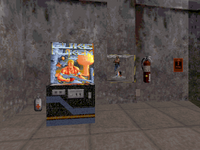 A Duke Nukem II arcade machine as seen in the first level of Duke Nukem 3D.

Weapons are found in green crates and look like round coins with one of four letters on them:

The weapons and ammo are carried with Duke Nukem to the next level.