Dynamite Dux is a side-scrolling 'beat 'em up' arcade game, created by Sega-AM2 and released by Sega in 1988 for their successful Sega System 16 arcade board, the same board that was used for hits like Golden Axe and Altered Beast. It was a moderate success and was ported to the Amiga, Amstrad CPC, Atari ST, Commodore 64, Sega Master System and ZX Spectrum in the following year.

The game uses a basic story, which consists of a girl named Lucy being kidnapped by the evil Sorcerer Achacha, and the player's mission is to rescue her. 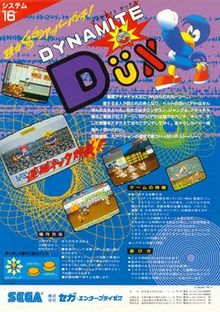 The player controls one of two bow-tie wearing cartoon ducks named Bin (blue) and Pin (red). They are Lucy's pets, and must travel through six stages set in real locations, though everything else in the game is very cartoonish, reminiscent of Tex Avery. Two players can play at once, Bin is by default player one's character, Pin player two's. Each level ends with a boss battle. After stages 2 and 4 there is a bonus round where the two ducks box until time runs out, the player with the most health will win and receive 50000 points.

Dynamite Dux uses only two buttons: the jump button (which is pretty self-explanatory) and the attack button. The attack button allows you to punch or throw enemies in a cartoony manner. The attack button can also let you pickup and use numerous weapons including: rocks, bazookas and the game's signature weapon, bombs (hence the title). Unlike some of its contemporary side-scrollers, Dynamite Dux allows players to attack in all directions, including diagonally.

The game measures health unusually in that it uses a status bar located at the bottom of the screen. A players status is made up of bars of health that are color coded blue, yellow and red, which deplete when damage is taken. Along with a varied set of enemies (all oddball cartoony looking characters) each level has a number of other obstacles that can inflict damage on the player(s).

There are three types of power ups: Food (replenishes health), weapons (all weapons will eventually 'expire') and treasure chests (give the player(s) extra points).

The game was ported to the Sega Master System in 1989, where the game was somewhat altered. Due to the console's limitations, both the graphics and sound are noticeably inferior to the arcade original which ran on the much more powerful System-16 board. The sprites are much smaller and different with many of the characters having noticeably less frames of animation. Many of the enemies unique dying animations had to be cut or altered due to the Master Systems limitations. There are less weapons and power-ups per level as well as fewer enemies per level.

The story has also been altered. Instead of being her pet, Bin (Pin does not appear, though none of the characters are actually named in-game, so it is just assumed that the star is Bin) is Lucy's boyfriend. Bin has been transformed into a duck by Achacha (similar to Toki).

See also: Other characters in Sonic the Hedgehog (games)#Bean the Dynamite

Bean the Dynamite was created by AM2 for Sonic the Fighters, a Sonic The Hedgehog fighting game, released initially for arcades in 1995 (it was given a limited US release as Sonic Championship) and finally ported to home console in 2005 as part of Sega's Sonic Gems Collection compilation; Bean is based solely on the characters Bin and Pin from Dynamite Dux (though he wears a neckerchief instead of a bow-tie and Sonic's shoes instead of regular sneakers).

Bean also appeared in Sega-AM2's Sega Saturn fighting game Fighters Megamix as a bonus unlockable character (along with Bark The Polarbear.) He is unlocked by completing the fourth arcade mode 'Muscle' and fought against in the final arcade mode 'Bonus'.