The "Advanced Generation" drawing and sprite design of Eevee was created by Ken Sugimori's team for its 2003 release on the Nintendo Game Boy Advance.

At first glance, Eevee are said to be just unremarkable Normal-type Pokémon, with above average intelligence and excellent eyesight, smell, and hearing. However, their DNA is uniquely structured. Eevee has earned its place in Pokémon history because it has seven different evolutions, as well as being the only First-Generation Pokémon to start out with the ability to evolve into multiple Pokémon — other First Generation Pokémon were also granted this ability, although not to the same extent as Eevee. The surrounding environment, typically radiation from elemental stones, is what triggers Eevee evolution.

Only a single Eevee can be found in Pokémon Red, Blue, Yellow, FireRed, and LeafGreen, the player having to visit the Celadon Mansion in Celadon City. This is the sole instance where a Pokémon is found merely sitting in its Poké Ball, waiting to be taken save for in Pokemon Ruby, Sapphire, and Emerald where Steven leaves a Beldum for you in his house after the Pokemon League.[1] In the games that take place solely in Kanto, the only Pokémon that Eevee can evolve into are Vaporeon, Jolteon, and Flareon by using evolution stones found or bought throughout the game.

In Pokémon Yellow, the player is supposed to obtain an Eevee from Professor Oak at the beginning of the game. However, the player's rival decides to take the Eevee before the player can obtain it. Thus, the player is given a Pikachu as a replacement. The rival's Eevee is one of the very few unevolved Eevees owned by a computer-controlled trainer. The rival evolves his Eevee into one of the three evolutions available, depending on the outcomes of the player's encounters with him in the early parts of the game.[2]

In Pokémon Gold, Silver, and Crystal, when Bill returns to his house in Goldenrod City, he gives the player an abandoned Eevee he found while repairing the Time Capsule trading machine in Goldenrod's Pokémon Center.[1] Eevee can also be obtained as a prize at the Game Corner in Celadon City.[1] In these games, Eevee gains the ability to evolve into two more Pokémon, Espeon and Umbreon, by utilizing two new mechanics — loyalty and the time of the day.

Eevee can be found in Hearthome City in the Pokémon Diamond and Pearl versions after receiving the National Pokédex. It may also be found wild in the Trophy Garden behind the Pokémon Mansion. Diamond and Pearl are the first games to feature wild Eevee. Also introduced in these games are two new evolutions, Leafeon and Glaceon, which are obtainable when Eevee levels up in two specific locations.

Eevee is also obtainable as a special "Pokémon present" in Pokémon Stadium along with several other "one time only" Pokémon.

In Pokemon Stadium 2, one of the twelve mini games is called "Eager Eevee", where the player dances around in a circle until Aipom lifts up the lid and reveals a fruit. The player with the most points wins.

Eevee cannot be found in Pokémon Ruby, Sapphire, Emerald, and Pokémon Colosseum, though two of its evolutions, Espeon and Umbreon, appear in Colosseum as the player's starter Pokémon.[3]

Eevee is also one of the sixteen starter Pokémon which players can play as in the Pokémon Mystery Dungeon games.

In Pokémon Snap, a game where the goal is to take pictures of Pokémon, Eevee can be found on the beach level, chasing a pink ball (which happens to be a Chansey). Throwing an object (such as Pokémon food) at the Eevee or the Chansey will allow Eevee to stop running so a quality picture can be taken.[5]

Eevee is notable for being the only Pokémon in the first generation of Pokémon to completely lose its original type (Normal) when it evolves (though now only one other Pokèmon, Azurill, does this).

Eevee's popularity has resulted in several Eevee-themed products. Besides the obligatory figurines, stuffed animals, and dolls, this Pokémon's likeness has been emblazoned on everything from hoodies to vanity cases. Additionally, a children's book entitled Eevee's Weather Report was printed on September 30, 2000. The book is about an Eevee that falsely predicts the weather.[6]

The first appearance of an Eevee in the Pokémon anime was in Episode 40, "The Battling Eevee Brothers". In this episode, Ash's party comes upon a family of four brothers, who all have or have had Eevees. Each of the three older brothers have evolved their Eevees into either a Flareon, a Jolteon, or a Vaporeon, and they are pressuring their youngest brother Mikey to evolve his Eevee, too. What they fail to notice is that he doesn't want to evolve it. However, when Team Rocket steals all of the Pokémon, Mikey proves that his Eevee does not need to evolve as it defeats Team Rocket when his brothers' Pokémon were unable to.[7]

In Episode 118, "The Rivalry Revival", Ash's longtime rival Gary Oak uses his Eevee in a battle against Ash's Pikachu. Tracy remarks that the Eevee has bright eyes and a shiny coat of fur, revealing its high level of experience. Eevee ultimately defeated Pikachu, using a Take Down to knockout its opponent.[8] Tracy also noted that Gary's Eevee was ready to evolve into a Stage-1 Pokémon,[8] which happened before the events in Episode 173, "Power Play", in which Ash and his companions discover that the Eevee had evolved into an Umbreon.[9]

In Episode 185, "Trouble's Brewing!", a family of five sisters in Ecruteak City, like the Eevee Brothers in Episode 40, are trainers of most of the different Eevee evolutions, including Vaporeon, Jolteon, Flareon, and Umbreon. The youngest sister, Sakura, has an unevolved Eevee. These Pokémon help in fighting off Team Rocket.[10] These same Pokémon reappear, with Sakura's Eevee having since evolved into Espeon, in Episode 228, "Espeon Not Included!", when Team Rocket kidnaps all of them. The Pokémon end up being rescued by Ash's party with help from the Espeon and Sakura.[11]

In Episode 434, "Time-Warp Heals All Wounds", May's Pokémon Egg hatches into an Eevee.[12] This particular Eevee's signature attack move is Shadow Ball, a Ghost-type attack. Eevee participates in Pokémon Contests, competitions where Pokémon are judged by how appealing they appear. It earns a ribbon, an award for winning a Pokémon Contest, after defeating Brock's Marshtomp in Episode 444, "What I Did For Love!". In the Episode "A Full Course Tag Battle!"(DP 076), May's Eevee evolves into Glaceon. Its English voice actresses is Michele Knotz.[13]

In the Pikachu Shocks Back series, a manga series that loosely parallels the Pokémon anime, Ash and his friends encounter a group of Pokémon enthusiasts, the Knights of the E Stone. Anybody who wishes to join the club must have a Pokémon that has evolved by an evolutionary stone. Similar to Ash's initial encounter of Eevee in the anime, a boy, Mikey, is being pressured by his three older brothers to evolve his Eevee so he can enter the club. Mikey refuses to do that, as he likes his Eevee the way it is, but he still wants to prove Eevee's worth. His Eevee battles a Jolteon and successfully wins by using Mimic to copy Jolteon's Pin Missile attack. His brothers accept Mikey and he is able to join the Knights of the E Stone.

In the Magical Pokémon Journey manga, one of the main characters, Coconut, the main antagonist and Hazel's rival, has an Eevee. Coconut spends most of her time brewing love potions for Almond (a boy whom Hazel and Coconut both love), which often injure her Pokémon. Eevee is also used in many of Coconut's different experiments.

In the Pokémon Adventures manga, Red was told by the gym leader, Erika, to obtain an Eevee. When Red found it, however, it constantly shifted between its evolutions, Flareon, Jolteon, and Vaporeon. Red discovered that it was because of a device in Eevee's ears, and suspected Erika. After battling her in the gym, Erika said that the Eevee was dying, and should be put out of its misery then by opening the Pocket Ball during the restoration sequence, which would certainly kill it. Red tries to stop her, and Erika reveals that it was actually a test to find out if he was the trainer Brock and Misty told her about. She restores the Eevee to full health, and explains that she was working against Team Rocket, the ones who put the device on Eevee in the first place. After this, Red keeps the Eevee, though after being healed, it no longer has the ability to switch back and forth between evolutions without the elemental stones as a result of the chip having been removed, though it will evolve and subsequently devolve if given the need to do so, which was later lost for good when it becomes an Espeon. 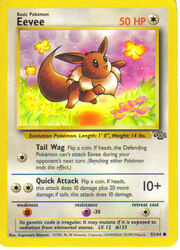 Eevee has appeared many times in different sets from the Pokémon Trading Card Game. It generally has a rarity of common, appearing as a common card in the sets Jungle, Team Rocket, Legendary, Aquapolis, Skyridge, EX Sandstorm, EX Unseen Forces, and EX Delta Species (appearing in two different cards in that set; one of which is a special card named "Eevee δ Delta Species"). However, Eevee has been labeled with a rarity of Uncommon in the sets Gym Challenge (as Lt. Surge's Eevee) and Neo Discovery. There is also a promotional Eevee card that was distributed during Pokémon Organized Play sessions.

A preconstructed theme deck (a set of cards that complement each other, allowing new players to have a competitive deck quickly) featuring Eevee was released in the Skyridge set. Entitled "Eeveelution", the deck had the necessary cards so that Eevee could evolve into Vaporeon, Jolteon, or Flareon.

Several Eevee cards mimic Eevee's potentially rapid evolutionary process. While a player usually has to have an evolution of Eevee in his or her hand of cards in order for an evolution to occur, some Eevee cards allow the player to search the entire deck for an evolutionary card of Eevee, causing evolution to occur much more rapidly. Eevee's promotional card allows Eevee to automatically evolve if another Pokémon evolves. Its card from the Neo Discovery set has the pontential to give Eevee a fifty percent chance to evolve every single turn.