Ekans (アーボ, Ābo, Arbo in original Japanese language versions) is one of the 493 fictional species of Pokémon in the Pokémon franchise. It is a snake-like Pokémon that swallows whole the eggs of small bird Pokémon such as Pidgey or Spearow. Its highly poisonous fangs make it a hazard in the wild. It uses its tongue to test the air for the presence of prey (small Pokémon that it feeds on).

The name Ekans is the word snake spelled backwards. Ekans' Japanese name, Arbo, is a reversal by morae of the word boa. Ekans' name in the English beta version was also Arbo.

Ekans is an omnivore who hunts stealthily in the grasslands. It can be diurnal or nocturnal. It curls up onto tree branches to sleep. This lets it glare at any predators who wake it up so they will go away. Ekans' appearance is similar to that of a normal rattlesnake, except that it is purple with yellow eyes with a matching ring around its neck.

Like normal snakes, its tongue can be used to 'taste' the air, sensing danger and nearby presences. Unlike normal snakes, which are born with the most potent poison, Ekans have no poison at all when just hatched. Additionally they often shed their skins, much like real snakes - the remains are often found curled around trees.

Its natural prey are the eggs of Pidgey and Spearow. However, it will eat larger prey if it can catch it, distending its jaw to swallow it.

Ekans began as an exclusive to Pokémon Red, and could not be caught in Pokémon Blue or Pokémon Yellow, but it could be found in Pokémon Gold, where it can be bought at the Goldenrod Game Corner. It can also be caught in the wild in Pokémon Silver, Pokémon Crystal, and Pokémon FireRed. Team Rocket Grunts commonly use them. It is also the third antagonist member of Team Meanies in Pokémon Mystery Dungeon, but does not contribute to the plot.

Ekans can possess one of two abilities: Intimidate or Shed Skin. Intimidate lowers the Attack of any Pokémon it starts a fight with (similar to the Growl move), and Shed Skin gives Ekans a 1 in 3 chance of recovering from a status ailment every turn.

Its moves are primarily Normal-type moves that lower an opponent's capabilities, although it also learns two Poison-type moves (Poison Sting and Acid) and (beginning with Pokémon Gold and Silver) the Ice-type move Haze. Its Hit Points, Defense, Special (in Pokémon Red and Blue and Pokémon Yellow) and Special Attack (starting in Pokémon Gold and Silver) are in the bottom 20% of all pokémon. Starting in Pokémon FireRed, Ekans can learn Poison Fang as an Egg Move if its father was a Seviper (the Seviper must have learned Poison Fang by leveling up for this to work), Poison Fang is a great move for the Poison-type Ekans to learn as it can both damage and badly Poison opponents.

In the anime, the most notable Ekans was owned by Jessie, who had received it before Episode 1 on her birthday. In a sentimental scene in episode 31 (Dig Those Diglett), Jessie's Ekans evolved into an Arbok after Jessie cried over it. As an un-evolved Ekans, one of the things that Jessie used it for is its wrapping technique, similar to that of a boa constrictor's. Later on, Jessie would release Arbok to protect a group of Ekans.

An Ekans is a member of "Team Meanies" in the half-hour animated special "Pokémon Mystery Dungeon: Team Go-Getters Out Of The Gate!". This Ekans is gluttonous and mean-spirited, but sometimes regrets his cruelty to others. In the English version of the special, this Ekans was referred to as "Arbok" (even by the closed captions), which is actually the name of its evolved form. However, this was changed in re-airings.

Koga has an Ekans in Pokémon Special. A twin pair of Ekans are antagonists in Pokémon PiPiPi Adventure. 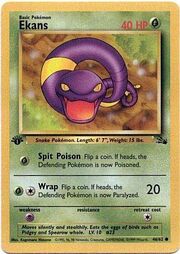 In the Pokémon Trading Card Game, Ekans appears six times as a common grass card. In Fossil, Ekans is weak (only 40 HP), but can cause poison with just one energy and paralysis and damage with only two. In Team Rocket, it is of standard health (50 HP), cannot cause paralysis, but can attack without Grass energy. In Gym Challenge, Koga's Ekans could cause both Confusion and Poison with only one grass energy, but the move worked only 25% of the time. In Expedition, it has standard health, can attack with one energy, and damages and poisons with the same attack. In EX Sandstorm, Ekans is of standard health, and does 10 damage and paralyzes 50% of the time with one colorless. In EX Team Rocket Returns, Ekans is a variant reprint of EX Sandstorm, with more HP (60) but without the ability to do damage. Thus, it cannot knock anything out, only stall pokémon.