The name "Electabuzz" is a combination of the words electric and buzz. Electabuzz is vaguely gorilla/tiger-like in appearance. It is bipedal and has two clawed feet, two arms, and a tail, all covered in bright yellow fur that features black zigzagging markings. Its head has a short antenna-like protrusion on each side.

Prominent in Electabuzz's metabolism is electric energy. Electabuzz is an ergovore, meaning that it feeds on electric currents. Its methods of securing its food vary: during thunderstorms, an Electabuzz climbs to the highest place possible, in hopes that it will be struck by lightning. As a result, many towns in the Pokémon world employ an Electabuzz in lieu of a lightning rod.

Electabuzz also lurk around power plants, feeding off the electricity generated there. This behavior is dangerous to the public, as occasionally blackouts are caused by an Electabuzz overindulging itself at a power plant, or worse, walking down to a city and drawing electricity from there.

Thanks to its unique diet, Electabuzz's body is constantly discharging stored electricity, to the point that it glows whitish blue in darkness and static electricity effects manifest. An Electabuzz can control the electric current coursing in its body to communicate with other Electric-type Pokémon, especially with another Electabuzz.

Electabuzz is difficult to acquire. In Pokémon Red and FireRed it is found in the Power Plant. In Pokémon Gold, Silver and Crystal, it is found in Route 10. In Pokémon GSC, it can also be found at the entrance to the Power Plant. In Pokémon XD an Electabuzz can be obtained two ways. One way is to snag it from Cipher Admin Ardos at Citadark Isle. The other way is to get Shadow Togepi from a scientist at Outskirt Stand, purify it, and trade it back for Elekid, which can then evolved into Electabuzz. The latter is not recommended since the Togepi is the only one in the game.

Electabuzz has generally very good stats, except in terms of Hit Points and Defense. It naturally learns Thunderbolt, a very good Electric-type move, and its good Attack stat allows it to use physical attacks quite effectively. Electabuzz is almost defenseless against Ground-type Pokémon, so such match-ups are discouraged. There is one exception that was introduced in Pokémon Versions Gold, Silver, and Crystal, when Electabuzz was able to learn Ice Punch via TM. Ice Punch can compensate for Electabuzz's weaknesses, but even with this move Electubuzz is considered helpless against Ground types. In FireRed and LeafGreen, Electabuzz can learn Ice Punch as an egg move from its predecessor, Elekid.

Electabuzz are also found in the Nintendo 64 game Pokémon Snap in the Tunnel Course. One chases around an Electrode near the start and can be photographed close-up if the player uses the Dash Engine equipped, and the other will flip a switch to give the player a clue for later in the level, if baited by the player.

The fourth generation Pokémon that recently appeared in advertisements for Pokémon Diamond and Pearl is now confirmed as an evolved form of Electabuzz named Electivire. It can evolve into Electivire by being traded with the Electirizer item attached.

Electabuzz was first featured as the mascot of one of two prospective Pokémon Gyms in Dark City (episode #42-Showdown in Dark City). In that episode, the Pokédex commented on Electabuzz's violent reaction to the color red, similar to common belief about real world bulls. Since this piece of information has not appeared anywhere else, however, it is assumed that is was provided as a deus ex machina for that episode's resolution although on one of its cards, the description says that it is particularly enraged by the color red.

An Electabuzz featured in "Misty Meets Her Match", in the Orange Islands saga of the Pokémon anime, in which one was owned by Rudy, the Trovita Island gym leader who had a crush on Misty. Rudy challenged Ash to a three-on-three battle, pitting Pokémon against those of the same type. Ash's Pikachu battled Electabuzz, but was overpowered by the gym leader's Pokémon. However, Ash's Bulbasaur and Squirtle defeated Rudy's Exeggutor and Starmie, earning him his Spike Shell badge. In Episode 110 (Enter the Dragonite), an Electabuzz was owned by Drake, the leader of the Orange Crew. Drake had his Electabuzz battle Ash's Bulbasaur and Charizard. Drake's Electabuzz defeated Ash's Bulbasaur before losing to Charizard.

In Episode 269, "Love, Pokémon Style", Ash had his first battle in the Johto Pokémon League, the Silver Conference, against a Fire-type trainer, Macey. Macey first uses her Slugma against Ash's Totodile, being badly damaged due to the type disadvantage. Macey then withdrew Slugma, and released her Electabuzz. Knowing that he was now at a disadvantage, withdrew Totodile and released his Phanpy. Macey then changed her Electabuzz for her Slugma, which was knocked out by Phanpy's Earthquake attack. Macey then released her final Pokémon, Quilava, which quickly knocked out Phanpy with its Flame Wheel attack. Ash re-releases Totodile, causing Macey to change her Quilava for her Electabuzz, which knocked out Totodile with his Thunderpunch attack. Ash released his remaining Pokémon, Squirtle, which repeatedly dodges Electabuzz's Electric attacks, finally knocking it out with a Skull Bash attack. Macey releases her only remaining Pokémon, Quilava and orders it to use its Flame Wheel attack to block Squirtle Water Gun. Squirtle defeats Macey's Quilava with its Hydro Pump attack, winning Ash the match and proceeding further in the Silver Conference.

Electabuzz is also the favorite Pokémon of recurring character Casey and is also the mascot of a baseball team of a similar name.

Electabuzz debuts in its own round, Buzz Off, Electabuzz!, as the main Pokémon of Lt. Surge. With its powerful ThunderPunch denies to enter to its Pokéball, being chained to control it. 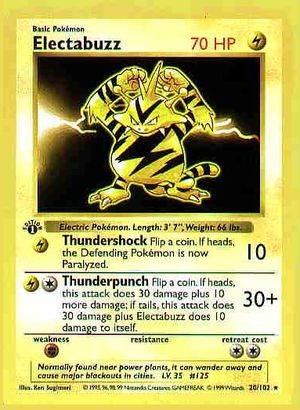 Electabuzz, as seen in the Pokémon Trading Card Game

Electabuzz has made a large number of appearances in the Pokémon Trading Card Game, likely due to the lack of Lightning Pokémon available. Electabuzz was one of four Promo cards given away at the viewing of Pokémon: The First Movie. It also appeared twice as a Black Star Promo from Wizards of the Coast. Electabuzz has appeared in the following sets: