Electrode (マルマイン, Marumain, Marumine in original Japanese language versions) is one of 493 fictional species from the Pokémon franchise. Electrode's name, rather simply, comes from the word electrode, which is a device through which electrical current passes. It may also be a portmanteau of the words "electric" and "explode", referring to its type and its characteristic of exploding. Its Japanese name is derived from maru, meaning round, and the English word mine, referring to its explosive nature. It is also an anagram of "manmarui", an adjective that means "completely round". It explodes if anything annoys or disturbs it, or sometimes just randomly.

This Pokémon is the evolution of Voltorb which, in theory, is the result of a powerful pulse of electricity striking a Poké Ball. Electrode feed on electricity; they can be seen congregating around power plants and in lightning storms. They are usually seen with very large grins on their faces (Which are notably on upside down compared to Voltorb's).

Electrode's most well-known and feared characteristic is its ability to explode at any given time. Electrode is very sensitive to the slightest shock, and will explode against its own will and without warning. They will also explode if they absorb too much electricity. Also if it has nothing to do, it amuses itself by exploding.

The electricity it stores is rarely used to attack foes. It is instead used to increase its rolling speed. The amount of electricity in an Electrode is relative to how powerful its explosions are. The stored energy also generates strong static electricity around Electrode's body, sometimes paralyzing enemies on contact.

Electrode also have disembodied eyebrows, which may float above it almost like floating antennae.

Electrode evolves from Voltorb at level 30. For those not patient enough to train a Voltorb, Electrode can also be caught in the wild. In Ruby, Sapphire and Emerald, Electrode can be found in the New Mauville Basement and the Aqua/Magma Hideouts. In FireRed and LeafGreen, Electrode can be found in the Cerulean Cave and in the Power Plant, disguised as item balls, as well as on Cinnabar Island, where players can trade a Raichu for it. In Pokémon Gold and Silver, Electrode are being used by Team Rocket to power a generator that is causing soundwaves which have been disrupting the Magikarp that inhabit the Lake of Rage. In [Pokemon Diamond and Pearl] Electrode can be obtained after catching a [Voltorb] in a swarm and evolving it at level 30.

Electrode is one of the fastest Pokémon in the games, but unfortunately it doesn't learn many moves to support its Speed.

Electrode are also found in the Nintendo 64 game Pokémon Snap in the Tunnel Course. They will either be wobbling in set positions or rolling around (a Pikachu may decide to climb on top of one Electrode and ride on it, making for an interesting photograph). If a stationary Electrode is hit with Pokémon Food or a Pester Ball, it will explode with Selfdestruct. This in turn may cause Kakuna to drop down from the ceiling. Near the end of a course, exploding an Electrode will reveal a hidden path that opens up the Volcano course.

Electrode makes a cameo in both Super Smash Bros. and its sequel, Super Smash Bros. Melee. In Super Smash Bros., it is one of the Pokémon that randomly pops out of the door of the Silph Co. building in the Saffron City level. It explodes soon after appearing, damaging any players in the blast area. In Super Smash Bros. Melee, Electrode can appear when a Poké Ball item is used. When it appears, it powers up for a few seconds, and then explodes, damaging anyone in the blast area, including the person who originally threw the Poké Ball. It has also been proven that once Electrode turns black just before detonation, it can be picked up by the Poké Ball thrower and thrown at an enemy, though there is an extremely small period of time during which this is possible. Electrode is one of the two Pokémon in Melee that can harm the player who released it, the other being Wobbuffet.

Electrode first appeared in the episode "The Flame Pokémon-athon"; it was used in a race by a trainer who ran on top of Electrode while it rolled. Electrode's first significant role was in the episode "Naval Maneuvers!" in which it was used by the Gym Leader Danny on Naval Island in his match against Ash. Electrode's most significant role was in the episode "The Underground Round Up". In this episode, Ash and co. arrive on an island overrun with Electrode. It has also appeared in Pikachu's Vacation, the short before the first Pokémon Movie, where it explodes as the starting gun for Squirtle and Marril's race.

It briefly appears in "It's Love! Pokemon Transformation Convention!" but disguised as a Gastly.

Electrode makes a cameo aboard the S.S. Anne in Danger: High Voltorb as one of Lt. Surge's Pokémon ready to attack Red. Lt. Surge also possesses a cannon capable of firing Electrode at high speeds to attack, supplied by Team Rocket technology. Since the disbandment of Team Rocket at the end of Volume 7, Lt. Surge is technically no longer a member, and it is unconfirmed if he still possesses the weaponry.

The Team Rocket grunts use a Voltorb and an Electrode to attack Yellow in the volume with the S.S. Anne.

Eusine, as seen in Volume 10, possesses an Electrode as well, allowing him to travel over large distances by riding it. Eusine's Electrode apparently uses electric charges to suspend itself in mid-air. 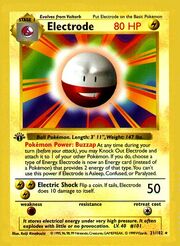 Electrode has made numerous appearances in the Pokémon Trading Card Game, equivalent to fellow Stage 1 Lightning-Pokémon Magneton. These include every one of the following stage-1 cards: