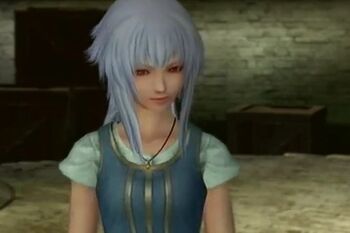 Elena in the Observatory

Elena is one of the main characters in Pandora's Tower. She loves to sing and has sung ever since she was a little girl. She is in a relationship with Aeron, the main protagonist of the game. She is skilled in home economics and many tasks and seems to have a connection with nature. She always has good intentions, helping Aeron all the time as she enjoys it and constantly worries about his safety.

Elena first met Aeron when she found him lying unconscious, wounded, near her home. It was 3 years before the main events of Pandora's Tower. She took him back to her home. While her parents warned her that it was dangerous keeping someone from Athos in their house during the war, she was determined to help him.

After being asked to sing at the Kingdom of Elyria's Harvest Festival, held in Helycon, she is afflicted by the Beast's Curse. Shortly after she transforms into a horrific beast, she is shot at by the guards on the walls. She retaliates by destroying part of one of the city walls, then runs off. Aeron finds here lying down, back in her human form, being watched over by Mavda, who is of the Vestra tribe.

Mavda and Aeron take her away from the city to escape the Elyrian Army who are searching for her. They take her to the Observatory. On the way, Mavda informs the two that she is cursed, as is shown by the mark on her back, and that she will slowly turn into a monster. The only cure is for her to eat the hearts of the 13 Masters, who reside in the Thirteen Towers. There is a time limit in which Aeron must climb the towers, defeat the Masters and bring back the hearts before she fully transforms. If she completely transforms, then she will never become human again, resulting in the "Game Over" ending.

The people of Elyria are followers of the religion Aios, and it is forbidden for those followers to eat meat. Elena has never eaten meat in her life before, which makes it extremely hard for her to eat the flesh of the monsters.

Elena has dreams when she eats the Master flesh. They are always about a happy family, and there is a young boy named Ruben in that family. In one dream they do the Vow of Aios, which implies that they are followers of Aios.