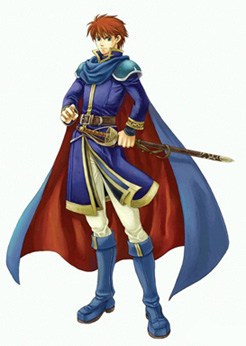 Eliwood is one of three main characters in the GBA Strategy RPG known as Fire Emblem: The Blazing Sword, which was released simply as "Fire Emblem" in North America and Europe. Eliwood is the prince of the nation of Pherae. He is skilled with a Rapier, and is the loving son of Lord Elbert.

His son is Roy, from Super Smash Bros. Melee and of course, Fire Emblem: Sword of Seals. His best friend is Hector, the prince of Ostia. His sworn protector is Marcus, a Paladin. He also has two Social Knights close to him, Kent and Sain. Overall, Eliwood is portrayed a typical, chivalrous, noble Lord.

Who he marries is dependant on the relationships you form in his game. It seems that the intended result is that he marries Ninian.