Emperor: Battle for Dune is a 2001 Real-time strategy video game by Intelligent Games for the PC.

Emperor Corrino has been killed by his concubine, Lady Elara, and the Landsraad has been thrown into chaos.

The Spacing Guild has presented the three remaining Houses (House Atreides, House Harkonnen and House Ordos) with a unique challenge: a war of assassins on the planet Arrakis. Whichever House wins the war will become the new leader of the Landsraad, and its leader the new Padishah Emperor, Emperor of the Known Universe. 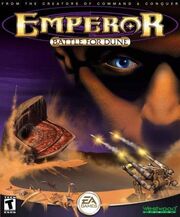