The Empire Earth series is a franchise of real-time strategy computer games developed by Stainless Steel Studios and Mad Doc Software, and published by Sierra Entertainment, Activision, and Vivendi. The games in the series are historical RTS games that are similar to Age of Empires.[1] Rick Goodman, who designed Empire Earth and Empires: Dawn of the Modern World, was one of the lead designers of Age of Empires. The games use the Titan and Titan 2.0 engine, which was sold after SSSI closed. 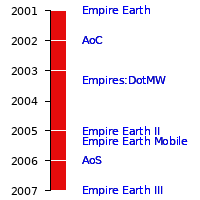 The first game of the series, Empire Earth, was released in 2001. It was developed by SSSI (Stainless Steel Studios), and published by Sierra Entertainment. The game was praised for its in-depth gameplay, and received positive critical acclaim. The 2 million unit sales were enough to spawn an expansion pack and several sequels to the game. The game had 14 epochs in it, which totaled 500,000 years. The game also included 21 nations, from every age and location. It was also developed for the mobile phone in 2005.

Empires: Dawn of the Modern World was not technically the sequel to Empire Earth, but it was released in 2003 and sometimes called the Spiritual Sequel to Empire Earth.[2] The game was also designed by Rick Goodman and the SSSI team, and had many throwbacks to the first Empire Earth. Empires: Dawn of the Modern World was much more condensed, with only 1,000 years and only nine civilizations. Even so, the game received positive acclaim as a good RTS, but not very innovative.

Empire Earth III, also called EE3, is a real-time strategy computer game by Mad Doc Software and released by Vivendi Universal on November 5, 2007 It was received very poorly in contrast to its predecessors.

Empire Earth Mobile is a Civilization' style TBS developed by Vivendi and published by Wonderphone. It is quite smaller than any other title in the series, with only four epochs and other condensed features.

The series' tag line for marketing (which is also the ending statement to the in-game video at the loading of Empire Earth) is:

as the games are very epoch diverse.[3]

File:Empireearth average reviews.png
The decline of reviews for each game, trend line shown in red.

Empires: Dawn of the Modern World multiplayer is no longer very active due to bugs and glitches which were not fixed by the developer.[6] Online activity continues to dwindle on Empire Earth II: The Art of Supremacy and Empire Earth III due to the lack of updates and support.