Enemy Territory: Quake Wars (often abbreviated as ET:QW) is a first-person shooter video game, and is the follow-up to Quake 4. However, it is set in the same science-fiction universe as Quake II and Quake 4, with a minimal back-story serving as a prequel to Quake II. It is the second multiplayer-focused game in the Quake series (after Quake III Arena). Enemy Territory: Quake Wars features similar gameplay to Wolfenstein: Enemy Territory, but with the addition of controllable vehicles and aircraft as well as multiple AI deployables, asymmetric teams, much larger maps and the option of computer-controlled bots. Unlike the previous Enemy Territory game, Quake Wars is a commercial release rather than a free download.

Enemy Territory: Quake Wars was developed by Splash Damage for Microsoft Windows using a modified version of id Software's id Tech 4 engine with MegaTexture rendering technology. It was released for the Xbox 360 and PlayStation 3 on May 27, 2008. On March 18, 2008, Aspyr Media released the title for Mac OS X. 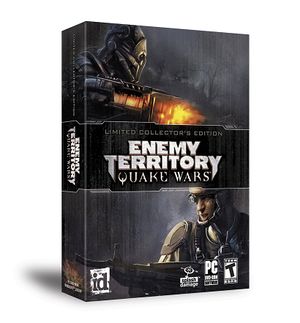