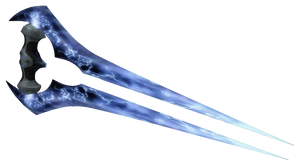 The Type-1 Energy Weapon/Sword, commonly known as the Energy Sword, is a close quarters weapon of the Covenant Empire exclusively used by the Sangheili.

In Halo: Combat Evolved, the energy sword has a cyan glow, a far less defined edge and makes a dull clunk when striking an object. It is only used by Stealth Sangheili and Zealots. The player cannot wield the energy sword due to the failsafe mechanism device that destroys the weapon upon killing the sword-wielder.

In Halo 2, the energy sword is blue with purple undertones and electrical energy crackling on it when the blade is activated. The white glow seen in Halo: Combat Evolved is also replaced with a more glass like transparency. In the campaign, it is only used by higher-ranking Sangheili, such as special operations units, Ultras and Zealots, though players can now wield the sword. The sword in campaign has a battery and can only be used effectively against a limited number of enemy forces before the battery runs out. The sword is usable in multiplayer with an infinite battery power. The Energy Sword has two modes of attacking; a lunge attack and a swing attack.

Changes from Halo 2 to Halo 3Edit

In Halo 3, the sword has more of a light cyan tinge, similar to its appearance in Halo: Combat Evolved, but still has a tint of purple near the handle. It also has an angle near the handle, whereas in the two previous games it was curved. Players are now able to parry with the sword. The power exerted by the swords hitting each other will drain both players' shields, but will not kill them unless one makes the fatal blow. The sword's lunge attack has been reduced for balancing purposes, aside from these changes in design and functionality, the power of the sword remains unchanged. In multiplayer, the sword has a limited battery supply.

Changes from Halo 3 to Halo: ReachEdit

In Halo: Reach, the sword resembles closely to the design used in Halo: Combat Evolved, albeit darker in color. When activated, the sword is capable of lighting up the surrounding area. When unused, the sword rests differently on the SPARTAN and Sangheili character models. The energy sword appears to have been balanced out compared to its earlier incarnations, having a slightly faster swing than its Halo 3 incarnation. Its lunge attack has been reduced in range and can now be blocked by a well-timed melee. The energy sword has its own assassination animations, which are used in place of the SPARTAN combat knife and the Sangheili energy blade. Elites also hold the sword farther back than Spartans do and actually hunch down slightly when they switch to the sword. The sword can now also be lowered using the Alert carry trick. The Energy Sword now has a "swing time" of about 1.5 seconds in which an object or player in front of the sword can take damage, allowing the player to kill enemies by swinging then moving into an enemy, rather than a lunge, where a player will move to an enemy before striking. Finally, it appears that the Energy Sword always does the same damage, regardless of whether the hit is a melee or a lunge.