Entei is one of three legendary beasts Pokémon from Pokémon Gold and Silver. Unlike the previous generation's legendary trio (Zapdos, Articuno and Moltres), Entei is not found in any specific place. It, and the other two legendary beasts (Suicune and Raikou) are found randomly in the wild after being released. The name Entei literally translates to (炎帝entei).

Entei is a large quadrupedal beast that bears resemblances to English Mastiffs and male lions. It has thick brown fur, a long mane, and what appear to be metal rings around its ankles. On either flank is a pair of jagged "wings", while on its back is a white streaming pennant-like formation that resembles a cloud of smoke or ash (as in volcanoes). It has a facial structure between its nose and mouth that is said to resemble a moustache.

Entei is the canine/feline embodiment of fire, being able to launch powerfully searing, hotter-than-lava fire from its mouth. An Entei is bound with pyroclastic fury which even its own, hefty body has a hard time restraining, and as such it looses parts of its extreme power and energy by racing around the land in a sprint. When it barks, volcanos around it are apparently triggered to erupt.

The three "Legendary Beasts" are common in one sense, having a structure similar to, or compromised of a Cloud on their backside. Entei's seems to be a billowing form of smoke, judging from its status as a lord of fire, which causes smoke when it burns.

Entei is a Pokémon steeped in legend due to its awesome power and traits. The most popular belief is that one is born every time a new volcano erupts. A more prevalent legend, though, holds that Entei is one of a triad of legendary canine/feline Pokémon that were reincarnated by the Phoenix-like Ho-Oh when they perished in the fire at a tower in Ecruteak City (now known as Burned Tower). Like its two alleged companions, Raikou and Suicune, Entei is said to embody an aspect of nature, in its case the passion of magma and the ferocity of volcanoes.

Entei is similar to Raikou and Suicune in that it is a Roaming Legendary Pokémon, making it among the hardest Pokémon to capture. It can only be encountered in the wild after awakening it in Pokémon Gold and Silver and Pokémon Crystal at the basement of the Burnt Tower near Ecruteak City. After that, Entei randomly roams wild grass areas in Johto. Likewise, in Pokémon FireRed and LeafGreen, if the player chooses Bulbasaur as his or her starter Pokémon, Entei will be wandering around Kanto in the same fashion after the player beats the Elite Four for the first time and has received the National Pokédex. Entei is also available in Pokémon Colosseum as a Shadow Pokémon that can be snagged in Mt. Battle from Cipher Admin Dakim. Dakim later appears at the Realgam Tower, but there, Cipher Admin Miror. B needs to be defeated to access Dakim's room.

Once an Entei has been released into the wild in a handheld version, it is completely up to luck whether the player encounters it in any particular wild grass area, just as with Raikou and Suicune. However, once it is encountered, the Pokédex will show its current location afterwards, allowing the player to strategically track it. Entei will change to adjacent locations on the Kanto map whenever the player walks into a new location or a building, following a set itinerary, and using Fly will make Entei change its position completely. When the player ends up in the same environment as Entei, he or she should search the grass thoroughly to flush out Entei.

Entei appears twice as a boss character in Pokémon Ranger. The second time, it protects itself with flames that will hurt the Capture Styler if touched, and also can use Flamethrower and summon up pillars of flames from the ground to prevent players from capturing it. It is the final boss in the main storyline.

As a Legendary Pokémon, Entei has overall high statistics, especially in Hit Points, Attack and Speed. Unfortunately, it doesn't learn many physical moves, which keeps it from its full offensive potential. Though it can learn the move Fire Fang in Diamond and Pearl through level up.

Entei also appears in Super Smash Bros. Melee as a Pokémon that can emerge from a thrown Poké Ball item (albeit rarely). It attacks using a powerful Fire Spin move in its area that heavily damages all who get in its way (except the Poké Ball-thrower). Its trophy is also the battlefield for the second Trophy Tussle event match. When it is beaten, you unlock its trophy. Also, being a legendary Pokémon, it is one of the Pokémon available in Pokéballs in the "Legendary Pokémon Event".

Entei also appears as both a boss and a playable character in Pokémon Mystery Dungeon in the Fiery Field Dungeon.

When Entei roars the volcanoes all over the world will erupt.However Entei is like Raikou and Suicune.They are called The Legendary Beasts.

Thanks to its legendary status, Entei is featured in the third Pokémon movie: Spell Of The Unown. A young girl, Molly, loved Pokémon, especially Entei. She compared her kind father with the noble Entei. When Molly's father disappeared, Molly unknowingly summoned the Unown. She used their power to wish for a new father. Consequently, an Entei was created by the Unown to be Molly's new father. Entei then grants all of Molly's wishes, including acquiring a new mother by kidnapping the mother of Ash Ketchum, the main protagonist of the series.

Ash is later forced to battle Entei. Ash's Charizard returns from the Charicific Valley by his own volition to help Ash gain the upper hand in the battle. Ash then mounts Charizard as Entei engages them, and a spectacular battle erupts. Charizard is more evenly-matched against Entei than Ash's other Pokémon, and the two Pokémon throw everything they have at each other. At one point, Ash tries to talk Entei out of fighting and doing what's best for Molly, but Entei persists. Just as Entei is about to use an unknown, but powerful, fire-based attack at point-blank range (which would have instantly killed Ash and Charizard), Molly stops him, and decides she wants to live in reality again.

When the Unown start to lose control of their combined Psychic powers, Entei is forced to attack the Unown in order to restore peace. As he was merely created by the Unown for Molly's sake, he subsequently disappeared once the Unown were defeated.

In the movie Spell of the Unown, Entei also left blue crystal-like structures in his wake as he ran. This may be because this was an "imaginary" Entei, created by the Unown, who also began crystallizing the surrounding area of Molly's Mansion.

In Spell of the Unown, Entei was voiced by Dan Green.

Entei has appeared in episode #261 ("Entei at Your Own Risk"), when a trainer tried to capture it. He planned to use his Misdreavus's Mean Look, but that plan failed because Entei countered with Roar (which is what often happens in the video games). 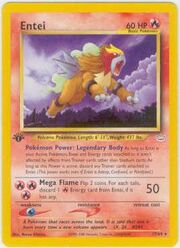 Entei, as seen in the Pokémon Trading Card Game

In the Pokémon Trading Card Game, Entei has appeared on many cards, all as fire-type Basic Pokémon in all the expansions listed below:

In addition, a reverse holographic promotional Entei was distributed at theatrical showings of Pokémon 3: The Movie in the United States and Canada.