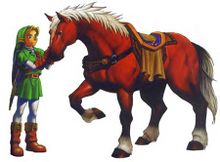 Epona is the one on the right.

Epona is the name of Link's warhorse in The Legend of Zelda: Ocarina of Time, as well as a few other games. I guess you could technically call her the Horse of Time. The name comes from the Roman Goddess of mules.

This horse was raised by Malon on Lon Lon Ranch. It is not until Link arrives in the future that Epona is grown up and able to be ridden. Here, Epona is being held captive by the new owner of the ranch, Ingo, and being trained to be Ganondorf's personal horse. When Link saves her, he can summon her from anywhere in the overworld with Epona's Song, which is taught to him by Malon when he's a child.

To further Epona's bad luck, in The Legend of Zelda: Majora's Mask, Epona is hijacked by the The Skull Kid. Link has to save her again. Once he saves her, he is able to ride her around as a child. In the introduction to The Legend of Zelda: Oracle of Seasons and Ages, Link is seen riding by the shore.

In The Legend of Zelda: Four Swords Adventures, she could be summoned by smashing glass orbs that contained carrots. She's gladly allow Link to use her to play minigames, so long as she gets to eat a carrot and some glass shards.

In The Legend of Zelda: Twilight Princess, the horse was referred to by many members of the press as Epona, and even named that in the E3 2005 demo, but as it turns out, the horse's name is customizable, as the player is supposed to have a strong relationship with the horse. Because in this game, Link is a cowboy.