Espeon (エーフィ, Ēfi, Eifie in original Japanese language versions) are one of the 493 fictional species of Pokémon creatures from the multi-billion-dollar[1] Pokémon media franchise—a collection of video games, anime, manga, books, trading cards, and other media created by Satoshi Tajiri.

Espeon is a feline Pokémon with psychic powers. It first debuted in Nintendo games Pokémon Gold and Pokémon Silver in 2000. It is listed as the 196th Pokémon in the games' National Pokédex.[1]

Espeon's name is derived from "ESP," an acronym for extra-sensory perception, a branch of psychic abilities.[2]

Espeon is a quadrupedal(four-legged) animal that has characteristics of cats. It resembles the nekomata, two-tailed demon cats found in Japanese mythology. It is roughly the size of a gray wolf, similar to other Eevee evolutions. Espeon is covered with lavender fur, which it uses to sense air currents, allowing it to predict the weather, as well as the actions of its opponent in battle.[3] Its forked tails quiver when this occurs.[3] A red jewel rests on its head, and glows whenever Espeon uses its psychic abilities.[3]

Espeon is very loyal to its Pokémon trainer once it considers him or her worthy.[1] It is said to develop precognitive abilities in order to protect its trainer, enabling it to see into the future to identify potential threats.[1]

Espeon is a Psychic-type Pokémon.[3] This affords it resistance against Fighting-type attacks, while making it weak against Dark-type and Bug-type attacks.

Espeon cannot be caught in any game, and must be evolved from an Eevee during the daytime when its happiness is very high.[4] If done at night, Eevee evolves into Umbreon instead. Espeon has very high special attack and speed statistics.[4] This makes it an effective "special sweeper," or a Pokémon that uses primarily special attacks combined with a high speed to quickly knock out the opponent. Espeon's movepool is limited, but it learns Psychic, a powerful offensive moved shared by many Psychic-types, Shadow Ball, a Ghost-type move that is a special attack in Pokémon Ruby and Sapphire, and Wish and Morning Sun as support moves.[4]

Also, in Pokémon Gold, Silver, and Crystal, a trainer named Red (based on Ash, from the Television Series), uses an Espeon.

In Pokémon FireRed and Pokémon LeafGreen Espeon cannot be obtained, as these games do not use internal clocks. An Eevee obtained in one of these games must be traded to a Pokémon Ruby, Pokémon Sapphire, or Pokémon Emerald version. Once traded, the Eevee can be evolved into Espeon and traded back.

In Pokémon XD: Gale of Darkness, Eevee requires a Sun Shard in order to evolve into Espeon.[5]

In Pokemon Colosseum, Espeon is one of the first two Pokémon you have, alongside Umbreon.

Espeon is first featured in episode 229, "Espeon Not Included!"[6] Its owner, Sakura, uses it in a battle against Misty's Corsola, and is defeated when Corsola uses Pin Missile. Sakura later battles Team Rocket with it, and succeeds in saving her sisters' Eevee evolutions.

Sakura returns with her Espeon in the eighth special of Pokémon Chronicles, "The Blue Badge of Courage!"[7] She aids Misty, who as assumed the duties of Cerulean City gym leader, in making more Cascade Badges. Sakura later acquires one through facing Misty in battle, and defeating her Corsola with her Espeon.

In episode 447, "Second Time's a Charm," Ash faces an Espeon owned by the sixth Frontier Brain, Anabel, in their rematch.[8]

In the fifth Pokémon movie, Pokémon Heroes, two thieves, Annie and Oakley, use their Espeon and Ariados to aid in their plot to capture Latios and Latias.[9]

Espeon has also made a short appearance in Destiny Deoxys.

The protagonist of the first storyline of the Pokémon manga, Red, received an Eevee from Erika of Celadon City. By the time Red enters the competition to become Viridian City's new gym leader, the Eevee evolves into an Espeon. 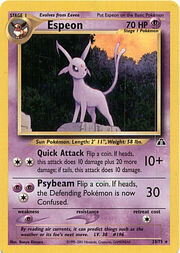