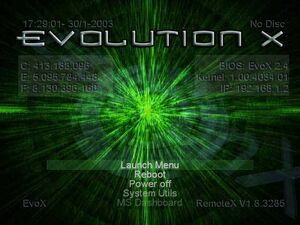 EvolutionX is two programs, an alternative dashboard and a hacked bios for the Xbox. It is commonly confused that the name EvoX means a different program, it is the same thing. To get EvoX on your Xbox you will have to either crack open the Xbox case and install a mod chip or by Soft modding. The hacked bios portion is not used for those that are installing a mod chip that comes with a bios already.

The benefit of having EvoX on your box is that you can run other programs through it. So in those terms think of EvoX as a new unrestrictive operating system for the Xbox. These additional programs can allow you to stream video/audio from your PC, DVD ripping, FTP, playing games from the HDD, burned DVD playback, and many more functions. EvoX is not the only dashboard on the block. There are more than a few that offer varying abilities that you may or may not need.

The original dashboard is not deleted when installing EvoX, it wouldn't be smart if it did. If a modded Xbox logs onto Xbox Live with alien software running in the backgroumd it will be banned from logging into the service FOREVAR! It's this reason that it is important to be able to choose which dashboard to load upon starting up the Xbox. With most mod chips comes a switch you install outside the box that will disable the chip allowing the original dashboard to load. For soft mods where there can't be this switch you will have to cold boot. 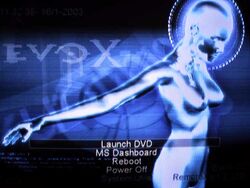 The sexiness of EvoX!
Retrieved from "https://gamicus.gamepedia.com/EvolutionX?oldid=123743"
Category: