Exeggcute (タマタマ, Exeggcute Tamatama in original Japanese language versions) is one of 493 fictional species belonging to the Pokémon franchise. Exeggcute's name is derived from the words egg and execute. Its Japanese name may be a pun on 玉 tama (ball) and 卵 tamago (egg).

Exeggcute resembles a cluster of six pink-shelled eggs, each bearing a distinct expression. Most of the eggs are cracked, some to the point of exposing a hard yellow yolk-like interior.

Although an Exeggcute is considered a single Pokémon, each one is actually comprised of six different entities collectively comprising the Exeggcute, though they may be connected through one telepathic brain-wave, incorporating their psychic powers. These entities are egg-shaped, although they are actually more related to plant seeds than eggs. They attract each other in groups of six using telepathic signals only they can receive and form a very strong bond of energy. Thanks to this bond the Exeggcute remain in their balanced formation and can spin around. Even if one is temporarily separated, it will quickly be rejoined with its swarm.

The shell of the creatures forming the Exeggcute is particularly durable. Even if it cracks, the mysterious content will not spill. It is said that if cracks increasingly appear on its surface, it is close to evolution. However, Exeggcute require exposure to Leaf Stones to catalyze their evolution into Exeggutor in the video games.

Exeggcute has pretty good statistics and many moves that induce status ailments and other annoyances, which makes it useful in battle. However, Exeggcute's evolved form Exeggutor is much more preferred due to its increased stats. It is the only Pokémon that can learn the Normal-type move Barrage naturally.

It is important to also remember that Exeggcute's dual type of Grass/Psychic makes it very vulnerable to bug-type moves.

The Exeggcute species was featured in episode #43 (March of the Exeggutor Squad), where it belonged to a carnival magician named Melvin. Exeggcute inadvertently hypnotized Ash to obey Melvin's every command. Melvin has Ash capture a lot of Exeggutor for him, but when they get out of line his Exeggcute evolves into an Exeggutor and forces every Exeggutor to hypnotize each other, sending them on a rampage. Exeggcute also made an appearance in the movie short "Pikachu's Rescue Adventure".

Bill is seen with an Exeggcute in Pokémon Special. Prior to the events of Volume 23, it has since evolved into Exeggutor. 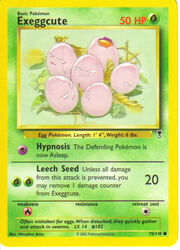 Exeggcute has appeared quite a few times on the Pokémon Trading Card Game.