Exeggutor (ナッシー, Nasshī, Nassy in original Japanese language versions) is one of 493 fictional species of the Pokémon franchise.

Exeggutor appears much like a walking palm tree, which evolves from the seed-bearing egg Pokémon, 'Exeggcute'. Each "coconut" or head dangles from the top of the tree; occasionally a head will fall off and return to the form of an Exeggcute. On many occasions, the heads are referred to as eggs, such as with the Pokémon attack "Egg Bomb" or the Pokémon TCG attack "Big Eggsplosion," not to mention the fact that Exeggutor evolves from a group of egg Pokémon. This suggests that Exeggutor is a tree which grows eggs rather than fruit.

Each of Exeggutor's heads has a different personality. Each head is very loud, as they all constantly talk about what they are thinking about and what they like. Thankfully, each of the heads are friendly and always get along with each other, unlike Dodrio. Its heads may be based on the legend of the Japanese Jinmenju.

Exeggutor also possess unexplainable psychic-powers. These powers may be used for each head to communicate with the Exeggutor's body and each individual head in order to easily move the shared body in cooperation. If a head falls off and becomes an Exeggcute, it will use its telepathic powers to communicate with other fallen heads to become a group of Exeggcute.

Exeggutor can only be obtained by evolving an Exeggcute with a Leaf Stone. It can also be snagged in Pokémon XD from Grand Master Greevil. Like many other Pokémon that evolve with an evolutionary stone, Exeggutor will be unable to learn moves that it would otherwise have learned as an Exeggcute, but can also learn a few moves that an Exeggcute would not learn.

Exeggutor is one of the Pokémon which suffered from the transition from the first generation to the second since the Special stat was split into two stats. This caused Exeggutor's Special Defense to be lower than its Special Attack, which was kept the same from the first generation. Exeggutor's dual Grass/Psychic nature gave it the advantage in Red, Blue, and Yellow; but the introduction of the Dark type and new Bug type attacks (to which Exeggutor has a double weakness) regulated Exeggutor's advantages.

Exeggutor first appeared in the episode "March of the Exeggutor Squad". A magician named Melvin captures a large amount of Exeggutor so that he can hypnotize people into coming to see his magic shows. He uses the Exeggutor to hypnotize Ash to become his slave. Melvin makes him pull his cart and forces Ash to capture Pokémon for him. His Exeggcute evolves into an Exeggutor and accidentally hypnotizes all the other Exeggutor whilst trying to put Team Rocket to sleep with Hypnosis. The herd of Exeggutor rampages, but Ash Ketchum uses his Charmander to snap the sense back into the Exeggutors.

Later, Ash's first opponent in the Pokémon League used an Exeggutor. Ash beat it with his Krabby that evolved right after into a Kingler.

Further on, Ash encountered another Exeggutor, one of the Pokémon used by Trovita Island's gym leader Rudy. Having trained under Rudy's unique training methods, Exeggutor used dancing to avoid all of Ash's Bulbasaur's attacks, but ending up losing after Bulbasaur let fly its Sleep Powder.

Exeggutor makes several appearances in Pokémon Special, one of the most predominant ones being in a rampage due to the Cerise Island battle.

In Volume 9, Exeggutor is one of the Pokémon Green captures outside the Viridian Gym. It is seen again in Volume 13 as a part of his squad in the Gym Leader faceoff, and again as a defender of Viridian Gym in Volume 24.

Prior to Volume 23, Bill's Exeggcute has evolved into Exeggutor. It was seen in Icefall Cave being targeted at by Green, testing out the Vs Seeker. 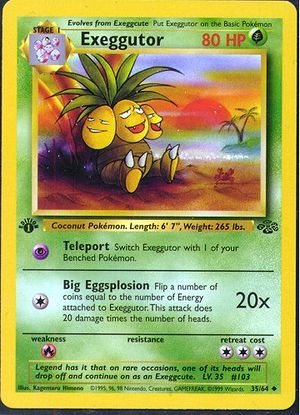 Exeggutor has made six appearances in the Pokémon Trading Card Game:

Exeggutor first appeared in the Jungle set of the Pokémon Trading Card Game. It is favored by strategists for its Big Eggsplosion attack, which allows the player to flip a coin for each energy card attached to Exeggutor. For each heads, Exeggutor does 20 (Jungle)/40 (Firered) damage to the Defending Pokémon.