As with all F-Zero games, GX is about futuristic racing: pilots race rocket-powered hovercars in an intergalactic Grand Prix at speeds that are typically 1000 km/h. The emphasis is on speed and creative racetrack design, with tracks looping through all three dimensions like roller-coasters.

Each of the 30 GX vehicles have their own handling characteristics, with varying top speeds, armor values and traction values. All of the cars in the game have an energy meter – this energy powers not only the car's protective shields, but a boost which can provide a burst of speed. If a car loses all of its energy, it will explode on contact, causing the player to lose a life or the match. However, energy can be regained by driving over special recharge strips in the road. It is also possible for players can also fall off the tracks, which are shown to be several miles up in the air. Finally, the game's controls are fairly sensitive, so players may have to practice with a given car before diving right into the Grand Prix. The game's visuals as well as the level layouts well convey the immense speed of the game. GX is known for its intense high-velocity action combined with a high learning curve. 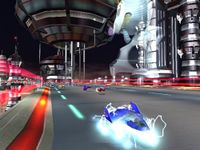 GX has two more tracks than F-Zero X, but it does not have a "X Cup". However, it has other new features. The new "story mode" provides a scripted adventure in the form of various non-standard racing scenarios – for instance, in the second of Story Mode's 9 missions, the player races a rival through a canyon and a rain of falling boulders. It is possible to replay these missions in "Hard" and "Very Hard" difficulty levels to unlock new parts and driver-specific vehicles from the arcade version. The new "customize mode" allows the player to use a variety of parts to customize a car, ranging from extremely heavy to extremely light ones. The game also has unlockable "staff ghosts" that you can try to beat - these ghosts do particularly good runs on tracks, and are exceedingly difficult. All of these things, once unlocked, are purchased using "tickets", which the player wins by completing one of the four Grand Prix Cups (Ruby, Sapphire, Emerald and Diamond) or story missions, or by achieving specific minimum times in time trial mode (which also unlocks that track's Staff Ghost).

The game's memory cards, on which saved games are kept, can be taken to an arcade with F-Zero AX, the game's arcade counterpart, to download a fifth cup-the Arcade or AX Cup – a number of new custom machine parts, and nine new vehicles. The AX Cup can also be unlocked by completing all the other cups (Ruby, Sapphire, Elemerald and Diamond) on master difficulty, and its vehicles by completing story mode missions on very hard difficulty. The parts can only be otherwise obtained by use of a cheating device.

Initially only the Ruby, Sapphire and Emerald Cups can be played. Diamond Cup can be unlocked by coming first in Ruby, Sapphire and Emerald Cup on standard difficulty in the Grand Prix. Individual AX tracks can be unlocked by placing first on the tracks in the arcade (F-Zero AX) version of the game and saving progress to a memory card. Placing first in the other four cups on the Master difficulty setting also unlocks five AX Cup tracks for purchase using tickets. The sixth course is unlocked by beating the AX Cup on any difficulty.