Farfetch'd (カモネギ, Farfetch'd Kamonegi in original Japanese language versions) is one of 493 fictional species belonging to the Pokémon franchise. Farfetch'd takes its name from the English expression "far-fetched", meaning "on the border of unbelievability". It could also refer to the game of fetch, which animals play using sticks (Its name may also be based on the story below).

The story behind Farfetch'd is that of the legend of a duck, who fetches a green onion for a person, only to bring it back to be cooked with the leek himself. The Japanese name is a further play on this; "Kamonegi" is a portmanteau of 鴨 kamo (wild duck, but can also mean a gullible person) and 葱 negi (a type of leek).

Farfetch'd is a rare land duck-type Pokémon with brown plumage and a black V-shaped marking on its forehead, and it holds a stick of spring onion like a scepter in one of its wings at all times. This onion stick, often considered a leek or a scallion,even some sort of "mystery plant", is the focal point to seemingly all of Farfetch'd's behavioral distinctions. Starting from Pokémon Gold and Silver, one can actually obtain an item called the Stick that looks exactly like Farfetch'd's onion, and it increases Farfetch'd's ability to have a critical hit, like the Dire Hit battle item.

When Farfetch'd looks for a new onion stick, it goes off to a spot where such a stick grows, and it will fight off and discourage any Pokémon that approaches the spot until the stick is ripe for picking. Here, it is demonstrated that some of these sticks are considered better than others, for other Farfetch'd fight with it over certain sticks in the area. With the stick in its finger-like wing quills, Farfetch'd uses the stick as its primary weapon against opponents by swinging it as if it were a sword, cutting through all sorts of things. The stick is even used for building its nest, suggesting that its nest is made mostly of these vegetables.

The use of the onion stick as its self-defense has achieved an ironic fate for the majority of the Farfetch'd species, for Farfetch'd has been consistently poached as game where it would be then served up as a meal edible by humans, with its onion stick as a side serving as perfect garnish. The resulting rarity of the Pokémon has caused an effort to breed the Pokémon in captivity so as to prevent its extinction.

In Pokémon Red and Blue and Pokémon FireRed and LeafGreen, only one individual Farfetch'd can be acquired, and it is through trading a Spearow with an in-game trainer in Vermilion City. In Pokémon Yellow, Farfetch'd is found as a wild Pokémon in Routes 12 and 13, and in Pokémon Gold and Silver it is found wild in routes 38 and 39, in the morning and afternoon hours. In Pokémon Diamond and Pearl, Farfetch'd can be found during randomly occurring swarms on Route 221. In addition, in Pokémon XD: Gale of Darkness, a Shadow Farfetch'd can be snagged from Cipher Admin Lovrina in Citadark Isle.

In the episode "So Near Yet So Farfetch'd", Misty encounters a Farfetch'd acting as a partner to a known criminal who likes to steal other trainers' Pokémon.

Farfetch'd appears one more time in the episode "A Farfetch'd Tale." In it, the son of a coal-maker tries to teach his Farfetch'd how to use the move Cut so that lumber can be gathered for his father.

Farfetch'd is the Pokémon owned by an Azalean boy as seen in Volume 8 of Pokémon Special. Both boy and Farfetch'd fell victim to the onslaught of Pryce's Pokémon in the depths of Ilex Forest.

Bill is later seen in Volume 10 riding a Farfetch'd as a mode of transport to pass Crystal the Portable Pokémon Transporter. 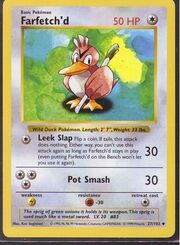 Farfetch'd is not the most prominent of all Pokémon cards. It has appeared in the following expansions:

The Emerald card is a secret holographic in EX Emerald.