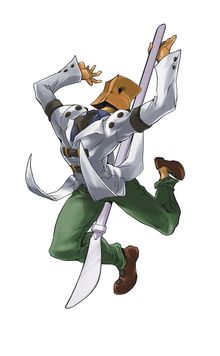 Faust is a fictional character in the Guilty Gear fighting game series, making his first appearance in the first game, Guilty Gear: The Missing Link as Dr. Baldhead, and then as Faust from Guilty Gear X onwards. Although it has never been explicitly stated that the two are the same person, it has been heavily implied by all official sources that this is indeed the case. Faust's extreme height and light weight give him a bizarre, tall, lanky physical appearance, and allows him to tower over every other character in the game (although he rarely does, due to his extremely low fighting stance). He wears a paper bag as a mask (with one eyehole), and wields a giant scalpel as a weapon, in addition to other unpredictable and bizarre moves.