Fearow (オニドリル, Onidoriru, Onidrill in original Japanese language versions) is one of the 493 fictional species of Pokémon in the Pokémon franchise. In the manga, anime and video games, Fearow is often found in the possession of Team Rocket Grunts.

The name Fearow originates from the words fear, the feeling Fearow is supposed to inspire, and sparrow, a type of bird. The Japanese name Onidrill comes from the word oni (鬼, oni), meaning demon or devil, and the English word drill, as well as tori (鳥, tori), meaning bird.

Fearow has large wings colored in shades of brown, an orange crest on its head and a very long and narrow beak. Fearow is instantly recognisable from its large wingspan, elongated neck and thin, long beak, all characteristics being a radical departure from its short-winged, stubby-beaked pre-evolved form, Spearow.

Thanks to its great wings, Fearow can fly much easier than it ever did as a Spearow. It can even use them to catch air currents and effortlessly glide over large distances for as long as a day without having to land or rest, an ability shared to an extent by real birds such as the albatross. If it senses danger, Fearow will immediately rise high to the sky. It tends to fly around incredibly high altitudes, even the edge of outer space.

Fearow's beak gives it a surprisingly long range of attack, making it rather dangerous in battle. It is adept at using its beak to pluck prey from under the soil or water. Fearow mainly feeds on small insects and fish in this way. It can also attack by rising high up in the air, then swooping down to divebomb its target.

Besides being evolved from Spearow, Fearow can also been caught in the wild. In various Pokémon video games, Fearow can be found in few Routes, and is not found in the Ruby and Sapphire versions.

Fearow has high attack and speed, but the rest of its stats are low, making it very weak defensively. Furthermore, while it learns a handful of good physical attacks, its movepool is not varied enough to make it stand out, and as such has been outclassed by Dodrio throughout the history of the video games.

In Pokémon XD it can be captured in Spearow form, from one of Administer Snattle's Henchmen.

In Pokémon Ranger, a Fearow is owned by Spencer as his partner Pokémon. It displays remarkable strength when it carries both Spencer and the hero to another town by flight.

In the Pokémon anime, Fearow has often been used as a fierce enemy of a character Ash Ketchum befriends, but sometimes it's in the possession of a Pokémon Trainer.

There is one Fearow that personally attacks Ash mercilessly when he returns to Pallet Town after the Pokémon League (Episode #83-Pallet Party Panic). This is the same Spearow that he accidentally threw a rock, attempted on a Pidgey, at in the first episode, having evolved after all that time. Also, in "Aipom and Circumstance", robot Fearows are used by Meowth, Jessie, and James to get a special crown off of Ash's Aipom.

Ran has a pair of Fearow she used to attack Shuu in Pokémon Getto Da Ze!. Ash had a Fearow he caught in the Electric Tale of Pikachu. It was his first capture and he gave it the nickname of "Fearless", although it wasn't very obedient towards him. 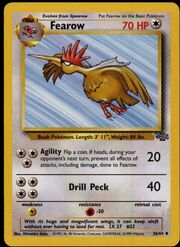