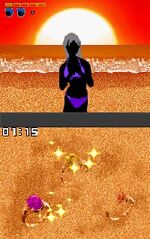 Search for the ring!

Note: Feel the Magic: XY/XX was renamed to Project Rub for the European release and I Would Die For You for the Japanese release.

Feel the Magic: XY/XX was a launch title for the Nintendo DS and arguably one of the first DS games to make effective use of the DS features. It's sequel (though, in terms of story, prequel) The Rub Rabbits was released in 2005.

Not only does the game effectively use the new input devices as a means of delivering innovative gameplay, but it also uses these devices as new means of immersion. Feel the Magic is about love. There are three, unnamed characters: The boy, the girl, and the bully. While one might assume that a wacky storyline, surreal graphics, vague characters and bizarre inputs would detract from the overall story immersion, Feel the Magic actually uses these features to add to it.

The girl could be any girl. The boy could be any boy. The story could be any story. The connection felt between the characters is heightened by the fact that you're interfacing with them in very human ways (touching, blowing, speaking).

The first half of the game is composed of stunts that the boy does to vie for the girl's affection, aided by a group of men called the Rub Rabbits (who apparently fursuit to work together to help men in the group find girlfriends).

These stunts are grouped in sets that can be played to earn love points' that fill up the heart meter. Winning certain games adds a certain amount of points, losing detracts. Once the heart meter is full, the girl will agree to go out on a date with you. These dates start off as holding hands in the park or strolls down main street, but typically end up turning into fighting off killer bees, shooting bulls with kung fu chi, and slingshoting pedestrians in high-speed chases.

As the game progresses, the boy and girl fall in love, but then the bully character comes in and adds dramatic conflict, and the rest of the story becomes (equally wacky) get-away, survival, and ultimately rescue-related minigames. 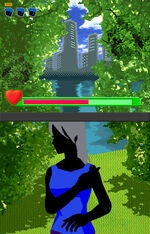 Yes, this game involves a lot of touching. 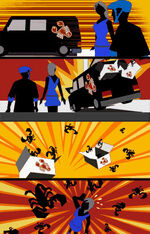 I hate it when this happens.

As with many games like Ico, The Sims or Tamagotchi, Feel the Magic attempted to make the player feel real emotions for onscreen characters. Feel the Magic did this in away that was never done before: Having the player touch, speak and blow to interact with the characters.

After a series of challenging minigames, the player finally got to hold the girl's hand (done by literally touching her hand, and moving your finger up and down with it to keep your hands connected), brush things off her back, button her dress, etc. Ultimately, as the story takes a dramatic turn, the player must fight grueling minigames against a the final boss. I personally got a pretty bad friction burn on my finger (which was more effective for this game than the stylus or thumb strap) against one of the forms of the final boss.

In Japan, the game's original title translated to I Would Die For You, which would have been a much more effective title than Feel the Magic, even though FtM was a pretty good title. The game ends with a stray shot from the final battle with the bully killing the girl. In a final minigame titled The Magic Touch, the player brings her back to life with a realistic CPR-simulating minigame. Though this could have been simply done on any other non-DS system as a tap A at the right time minigame, the fact that you had to blow into the microphone in short, controlled breathes, and push on her heart with your hand in a steady pulse, made the experiences seem very real, despite the fact that the girl was just a silhouette in a blue dress.