Feraligatr's name is derived from a combination of the words ferocious or feral, and alligator. It is generally believed that its real name is Feraligator (as is hinted by the way the characters from the anime pronounce it), however is instead referred to as Feraligatr due to the fact that Pokémon names as text within the video games are designed to fit only 10 characters and the name Feraligator has 11. Its Japanese name is a portmanteau of ō (大, ō), large, and crocodile.

Feraligatr have long, blue bodies with four legs, although they may also stand upright on land. Its appendages have sharp claws at the ends, and its jaw is lined with teeth. On its head, back, and tail there are red, jagged scales. The yellow band it had as a Totodile reappears when it evolves from Croconaw. Feraligatr resembles a two-legged alligator or crocodile with a hunched back. This gives it the appearance of bending over. As stated in the Pokédex in Pokemon Ruby and Sapphire, "Feraligatr intimidates its foes by opening its huge mouth. In battle, it will kick the ground hard with its thick and powerful hind legs to charge at the foe with incredible speed." It is also the largest full evolved starter (in terms of height) to date.

Feraligatr can normally only be obtained by evolving Croconaw at level 30, or by trading with another player.

Feraligatr has excellent attack and defense, as well as above average hit points but its speed and special attack/special defense are average. Pokemon such as Blastoise, Swampert, Suicune, and Milotic seem to be preferred for competitive battling. However the addition of Dragon Dance as an egg move as well as the physical/special change in Diamond and Pearl may bring up its popularity.

Feraligatr can be obtained in Pokemon Colosseum, but first it must be evolved from Croconaw.

Feraligatr is not obtainable in Diamond and Pearl normally. It can be transferred to Diamond or Pearl from Ruby, Sapphire, Emerald, FireRed, or LeafGreen after conditions are met in the newer games, along with the other starter Pokemon from all three previous generations.

Feraligatr also appears in Pokémon Mystery Dungeon as a member of Team Hydro along with Swampert and Blastoise.

Feraligatr has appeared in episode #196 (Ring Masters), where a trainer entered one in a Pokémon Sumo Tournament in which Ash's Snorlax also participated. Snorlax beat Feraligatr in the finals.

In the Johto Saga A trainer with a Feraligatr deafeated one of Misty rivals to win the Whirlcup.

Feraligatr have appeared in a couple of Pokémon Chronicles episodes. One lives in Big Town with the Pichu Brothers, while another is owned by the official Gym-badge maker, although it only made a cameo. A Feraligatr sparred with a Typhlosion early in the Hoenn Saga

In Pokémon Special, Silver's Croconaw evolved into Feraligatr to protect Gold, Crystal, and himself from Lugia. 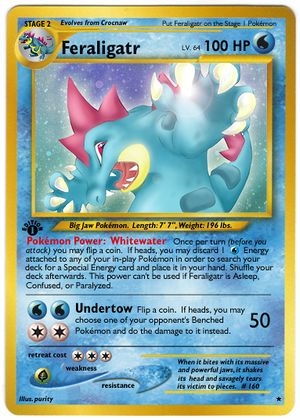 Feraligatr comes close to the legacy of Blastoise in the Trading Card Game. These are its appearances: