Final Fantasy: Legends of the Crystals

Final Fantasy: Legend of the Crystals is the first anime to use the Final Fantasy license. It was released in Japan in 1994 and distributed by Urban Vision in 1997-1998 in North America. 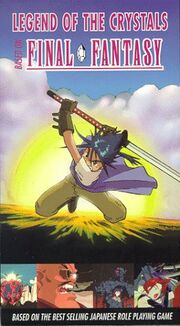 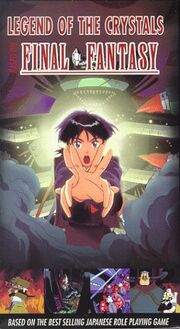 The story takes place on the same world as Final Fantasy V, named Planet R, set two hundred years in the future, where three of the four crystals have been stolen. The original heroes in Final Fantasy V are now legends of the past, and a new evil, Deathgyunos, has risen on the Black Moon and must be dealt with. Mid, the only recurring character from Final Fantasy V, contacts a new hero and heroine: Prettz (Pritz) and Linally. They eventually meet the sky pirate Rouge and Commander Valcus, commander of The Iron Wing.

Final Fantasy: Legend of the Crystals has a short and quickly resolved plot, typical of many fantasy OAVs. Due to its short length, a small time passes between the introduction of characters to their ability to defeat the "final boss." This contrasts sharply with the overall length of the Final Fantasy games themselves, as well as longer fantasy anime series such as Dragon Quest: Dai No Daibouken.

Several visual differences exist between the anime and the game its setting is based on:

Final Fantasy: The Legends Of The Crystals is a 12 part OVA. The original game focuses on the four crystals, however the OVA version mainly focuses on saving the Wind Crystal. When the two main characters arrive at the Wind Shrine, the Wind Crystal ends up getting trapped inside. Linally is protecting it as best as she can. In the end, the Wind Crystal is safe.