The game is still the same as its predecessor, Final Fantasy Crystal Chronicles: Ring of Fates, although with many updates and changes. The player still controls the characters through the arrow buttons and use interactive abilities (attacking, magic, or holding) through the A-B-X-Y buttons. The DS version cannot host a Multiplayer game if there is a Wii being used to play cooperatively.

The game still uses each tribes' combat system, mostly an overhead real-time hack-and-slash form of fighting; however, it added in a new weaponry system, in which all tribes may use a variety of weapons and have abilities which range from two to three types of weapons. New weapons have also been added (Sling-shot weapons, paddles). Armor and weaponry may now level up on their own through battling. Also, a new jewel system replaces the ability-equip system in the past game, where players may now add jewels to weapons with enough slots to add extra abilities. Jewels range from as simple as ATTACK-UP to more complex forms that even allow the player to break the usual level cap for the equipment piece.

The Magic system was revamped. While still retaining its key components (target rings, elemental casting), it now consumes MP rather than gathering magicites. The slots system has been eliminated completely, however such items as ethers and potions do appear in the game to be used on-the-spot. Fusion spells are now simpler to perform, as certain spells (Gravity, quake) do not require so many complex and tedious combinations. They have become as simple as "Blizzard" and "Raise" for Gravity, "Fire" and "Raise" for Quake. In addition, rings will now lock onto an enemy, removing the threat of missing a hard to cast spell and wasting valuable MP. You can also change spells by holding the R button and scrolling up or down.

The Wii version of the game contains all of the major elements of the DS version, but must be played on a single screen. To compensate, the Wii version has two adjustable in-game windows. Each window has a maximum size that is approximately 40% of the total screen which can make the text (on both the play and item windows) difficult to read. As a minor addition, the Wii version also contains a new trailer for the next Crystal Chronicles game entitled "The Crystal Bearers", and allows players to create masks based on their Miis which costs 5000 gil.

The protagonist of the game returns from a forest where he/she battled a great number of monsters to celebrate his/her sixteenth birthday and coming-of-age ceremony. Upon completion, a cat-girl named Sherlotta rewards him/her with a personal crystal. The hero returns home to find a young village girl, Eryll, suffering from "crystal sickness". The hero then sets out to find a cure for the disease. However, he/she is unaware that outside his village lies a world where crystals are merely artifacts of the past and no longer exist.

In a nearby city, he/she meets a man named Larkeicus, who agrees to make him/her a cure in return for a favor. Obtaining the necessary ingredients, the hero is able to make the potion and saves Eryll. As part of the bargain with Larkeicus, the hero must activate two long-dormant statues atop a fire and ice mountain.

When he/she completes his/her task, Larkeicus begins plotting against the hero, first by destroying the "Crystal Core", which is said to be the last crystal remaining in the world. The following day, the hero awakens to his/her village unoccupied, as if all the villagers had left. Eryll is still left behind and asks him/her to find the broken pieces of the Crystal Core, believing that putting it back together will bring everyone back to their home. Larkeicus goes rogue and attacks the player, but returns from the dead after defeat, warning that should they meet again, he will kill him/her. Later finding an immortal Yuke who worked alongside Larkeicus 2000 years ago, the Yuke gives him/her a method of locating the crystals and hopes that by doing so he amends for some past mistake of some sort.

One by one, the hero locates the crystal fragments, discovering more about his/her infancy and the town's history through sudden flashbacks, particularly Sherlotta, who found the hero abandoned as a baby and raised him/her as a son/daughter.

He/She also notes that none of the villagers seemed to have aged from their past selves. When the crystal core is complete, it suddenly manifests itself into the hero's body, giving him/her the power to interact with ancient technologies. He/She uses his/her newfound power to delve further into the forests near his/her village, where he/she learns a startling revelation. 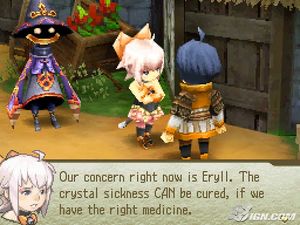 The hero discovers his/her village in ruins. Sherlotta appears and explains that Larkeicus and a Yuke apprentice razed the village 2000 years ago, and all of the inhabitants were slaughtered in the attack. Sherlotta and Eryll were attempting to escape, but Eryll was killed and Sherlotta was made immortal when she made indirect contact with the Crystal Core. It also gave her the power to create crystals, although Sherlotta herself doesn't understand why it chose her to be the harbinger of such powers.

The Crystal Core also made the villagers live, although they could not age, and their existence was tailored toward the Crystal and to the minds of those who wish to see them. Sherlotta and the villagers lead empty lives for 2000 years, until they found an infant which they could grow and raise to live for them in the outside world, the infant being the hero. With this, Sherlotta accompanies the player to put an end to Larkeicus's plan, as he wishes to stop a future event which was so powerful it destroyed all the crystals, and his city which ran on their power.

Sherlotta and the hero attempt to find a way to gain access to a tower which emerged when the hero activated the two statues, as she believes that is where Larkeicus plans to stop the future event. To do so, they gather a number of artifacts, including the hero's crystal locator and an 800 year old spirit-witch made by Larkeicus to guard the artifacts (Who later aids the player greatly in finding the later artifacts). During this search, the villagers begin their slow process of disappearing from the world, valuing every moment the hero comes by to see them.

Eventually, only Norschtalen remains, as she is the second orphan the village raised and still mortal in her time. With nothing left to cherish or protect, Sherlotta and the hero go to the tower. To open the way, they use the artifacts and abandon the witch to an isolated spot near the entrance, saying that maybe someday somebody will come to retrieve her.At the top, the hero is surprised to see another, human Sherlotta, blind and deaf to her surroundings.

The cat-Sherlotta explains that her present was made after Eryll's pet cat had also retrieved the power of immortality. Through the cat, Sherlotta was able to live off in a depression until she found the hero, where the meaning of life and death became clear in her head again as she and the villagers dedicated their lives to helping you grow into a suitable adult. She then gives one final request to the player, to kill her so that her lifeless body cannot aid Larkeicus any longer with its powers. Larkeicus appears to make good on promise to kill the hero, after a long battle where he destroys Sherlotta's cat-form and continually abuses her power, the hero and he reach a stalemate.

The hero does so, and returns home triumphant, though deeply depressed at the cost of victory. With only he/she and Norschtalen inhabiting the village, the hero makes one final pilgrimage through the forest where he/she received his/her own crystal. Still holding the crystal he/she received, he/she throws it into the pond where the Crystal Core was once located and walks away, his/her past gone and future ahead.

After the credits role, the player is free to continue playing on harder difficulties. It is also revealed that Eryll's cat, conveniently named Sherlotta, is still alive. As such, the hero takes notice to the reminder of the past. It is also shown that the tiny crystal the hero had thrown into the pond has grown into a larger one, resembling the Crystal Core. It is likely a new Crystal Core created by the hero's own will. It is presumed that the hero will live out the rest of his/her adult life seeking comfort and happiness, just as his/her family (the villagers) would have wanted.

The game was revealed to the public at the 2008 Tokyo Game Show.

It uses a new engine created by Square Enix called the Pollux Engine, which allows players to link up and adventure together in multiplayer mode regardless of which version of the game (Wii or Nintendo DS) they are playing.

The Wii version of the game contains a new trailer for Final Fantasy Crystal Chronicles: The Crystal Bearers.

In the first week of release, the DS version of Final Fantasy Crystal Chronicles: Echoes of Time sold 101,718 copies in Japan, while Wii version sold only 21,721 copies. The following week, the DS version sold an additional 33,985 copies. Sales in its first week in North America weren't so positive though, as approximately 25,000 were sold on the Wii and 16,000 were sold on the DS. As of May 31, 2009, the game has sold 570,000 copies worldwide.

Famitsu magazine gave the Wii version a 29 out of 40 and the Nintendo DS version a 30 out of 40. Reviews in the west were also positive. IGN gave EoT 8.5 out of 10 (but only 6.5 for the Wii version), commenting on the tighter controls and gameplay, particularly praising the multiplayer, stating, "multiplayer is a blast with Echoes of Time". GameInformer gave EoT 7.5 with a second opinion of 8.