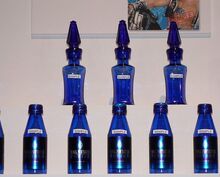 It's a real drink.

Final Fantasy XII Potion is a light-blue soft drink based on the HP-healing potions found in all Final Fantasy games. "Potion" is also a common name in other RPG games. It is identified as a "Final Fantasy XII" potion to coincide with the release of the video game. Unlike in the video game, the potion does not heal anyone who drinks it. It merely quenches thirst.

When asked to describe the taste and/or feeling associated with drinking the potion, GameSpot editors gave answers varying from "Flowers" to "A Turtle."