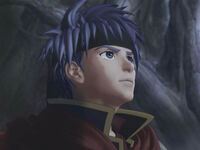 The mercenary group fights their way through south to Gallia, where they come across some close calls. Before they can reach the capital, Greil is killed by a fierce general of the Daein army, known only as The Black Knight. Ike watches the battle from afar and learns that his father was once a General of Daein, and teacher of The Black Knight. Greils final command in his team is to put Ike in charge. This outrages some long time members, who choose to abondon the group. Eventually, they are saved by Laguz, and are escorted to the capital.

In their capital, they acquire new laguz allies, as well as information. King Caineghis informs them that Gallia cannot help Princess Elincia take back Crimea despite their alliance. His people would never stand for it, and would never fight for the sake of humans who look down on them. It is suggested that instead, they go to Begnion for help in rebuilding her country. They take a boat around the continent to reach it due to impassable mountains.

At the port town in Crimea, they are astonished to find residents going about their business like they aren't at war. They are apathetic to the violence and destruction of their capital, hoping that ignoring the chaos will make for a smoother transition. When one of their allies is revealed as a laguz, the town attacks him. Ike is shocked at their hatred for a peaceful laguz, while acceptance of a foreign (yet human) army that has just murdered their royal family. Because of this, he steps to the aid of the laguz, and they are forced to fight their way to their escape.

Along the way, they are attacked by pirates from the Bird Tribe and are helped off a reef by members of the Dragon Tribe. They discuss how moral it is to simply classify all birds as evil and all dragons as good from their experience. Soren, an advisor and realist, bring up a similar question about classifying all Crimeans as good and all Daeins as evil. Eventually, they reach Begnion, where Elincia is welcomed by The Apostle. Elincia's identity was confirmed by their Prime Minister, Sephiran, who was saved by Ike and company.

will finish as I go on, maybe even shorten.