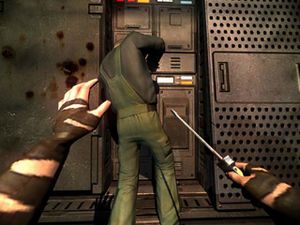 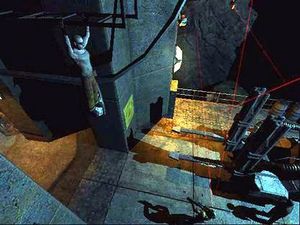 To get around this some games have a function within the game to switch from first person to third person at the gamers choice (an example of this is Metroid Prime's Morph Ball & Metroid Prime 2's Screw Attack). Some games even do this switch seamlessly by itself whenever the player needs a better view of his/her surroundings like in The Chronicles of Riddick: Escape From Butcher Bay.

Games with a first-person perspective are usually avatar-based, wherein the game displays what the player's avatar would see with the avatar's own eyes. Thus, players typically cannot see the avatar's body, though they may be able to see the avatar's weapons or hands. This viewpoint is also frequently used to represent the perspective of a driver within a vehicle, as in flight and racing simulators; and it is common to make use of positional audio, where the volume of ambient sounds varies depending on their position with respect to the player's avatar.[1]

Players have come to expect first-person games to accurately scale objects to appropriate sizes. However, key objects such as dropped items or levers may be exaggerated in order to improve their visibility.[1]

While many video games featured a side-scrolling or top-down perspective during the 1970s and 1980s, a number of games during that time attempted to render the game world from the perspective of the player. Light gun shooters in particular often used a first-person perspective. An early first-person shooting and combat flight simulator video game was Taito's Interceptor (1975), which featured enemy aircraft that scaled in size.[2]

While many games featured a side-scrolling or top-down perspective, several early games attempted to render the game world from the perspective of the player. The earliest known examples were several electro-mechanical arcade games produced by SEGA which resemble first-person video games, but were in fact electro-mechanical games that used rear image projection in a manner similar to the ancient zoetrope to produce moving animations on a screen.[3] The first of these was the light gun shooter Duck Hunt,[4] which SEGA released in 1969.[5] That same year, SEGA released the electro-mechanical games Grand Prix, a first-person racing game[6] projecting a forward-scrolling road on a screen,[7] and Missile, a first-person vehicle combat sim that had a moving film strip project targets on screen and a dual-control scheme where two directional buttons move the player tank and a two-way joystick with a fire button shoots and steers missiles onto oncoming planes, which explode when hit.[8] In 1970,[9] the game was released in America as S.A.M.I.[8] That same year, SEGA released Jet Rocket, a first-person combat flight sim with cockpit controls that could move the player aircraft around a landscape displayed on screen and shoot missiles onto targets that explode when hit.[10] In 1972, SEGA released their final electro-mechanical game Killer Shark, a first-person light gun game known for appearing in the 1975 film Jaws.[3] In 1974, Nintendo released the arcade light gun shooter Wild Gunman, which used full-motion video projection to display live-action cowboy opponents on screen.[11]

While light gun shooters often have a first-person perspective, they are distinct from first-person shooters, which use conventional input devices for movement.[12] It is not clear exactly when the earliest such first-person shooter video game was created. There are two claimants, Spasim and Maze War. The uncertainty about which was first stems from the lack of any accurate dates for the development of Maze War—even its developer cannot remember exactly. In contrast, the development of Spasim is much better documented and the dates more certain. The initial development of Maze War probably occurred in the summer of 1973. A single player made their way through a simple maze of corridors rendered using fixed perspective. Multiplayer capabilities, with players attempting to shoot each other, were probably added later in 1973 (two machines linked via a serial connection) and in the summer of 1974 (fully networked).

Spasim was originally developed in the spring of 1974. Players moved through a wire-frame 3D universe, with gameplay resembling the 2D game Empire. Graphically, Spasim lacked even hidden line removal, but did feature online multiplayer over the worldwide university-based PLATO network. Another notable PLATO FPS was the tank game Panther, introduced in 1975, generally acknowledged as a precursor to Battlezone. Spasim had a documented debut at the University of Illinois in 1974. The game was a rudimentary space flight simulator, which featured a first-person perspective.[13]

In 1975, SEGA released the early co-operative light gun shooter video games Balloon Gun[14] and Bullet Mark, where light guns are used to hit a variety of moving targets displayed on the monitor, with different points awarded/deducted for hitting/missing different targets.[15] That same year, Taito released Interceptor, an early combat flight simulator that involved controlling a jet fighter while moving a crosshair to aim and shoot at enemy aircraft that move in formations of two and scaled in size depending on their distance to the player.[16] In 1976, SEGA's Road Race extended the car racing video game genre into three dimensions with a first-person perspective. It displayed a constantly changing S-shaped road with two obstacle race cars moving along the road that the player must avoid crashing while racing against the clock.[17]

In 1980, SEGA's arcade space shooter Space Tactics also allowed players to take aim using crosshairs and shoot into the screen at enemies coming towards them.[18] A few other shooters with a first-person perspective were released during the early 1980s, including Taito's Space Seeker in 1981,[19] Bandai's Mobile Suit Gundam: Last Shooting in 1984,[20] and several SEGA releases, including the vector space simulator game Star Trek[21] and stereoscopic 3-D game SubRoc-3D[22] in 1982, and the laserdisc video game Astron Belt in 1983.[23] First-person light gun shooters would rise in popularity during the mid-1980s,[24][25] with Nintendo's Duck Hunt being a much-loved example.[12] In 1986, the first-person shooter Z-Gundam: Hot Scramble[26] allowed the player to aim and lock-on to enemies while shooting and gave the illusion of six degrees of freedom in its open space levels.[20]

Later in the decade, the arrival of a new generation of home computers such as the Atari ST and the Amiga increased the computing power and graphical capabilities available, leading to a new wave of innovation. 1987 saw the release of MIDI Maze (aka Faceball), an important transitional game for the genre. Unlike its polygonal contemporaries, MIDI Maze used a raycasting engine to speedily draw square corridors. It also offered a networked multiplayer deathmatch (communicating via the computer's MIDI interface).

In 1988, Golgo 13: Top Secret Episode featured various first-person shooter levels and is notable for introducing a sniper rifle, used in unique missions requiring the player to assassinate an enemy agent from a long distance using an unsteady sniper scope.[27] In 1990, SNK released beat 'em ups with a first-person perspective: the hack & slash game Crossed Swords,[28] and the fighting & shooting game The Super Spy,[29] which introduced the concept of showing the player's hand on-screen, strengthening the illusion that the player is viewing the world through the character's eyes. In early 1991, Data East released Silent Debuggers for the TurboGrafx-16. This game featured a minimum ability to look up and down. It also allowed players to aim the gun sight when shooting at enemies.[30] In late 1991, the fledgling id Software released Catacomb 3D, which also featured the concept of showing the player's hand on-screen.

Taito's Gun Buster was an innovative first-person shooter released in 1992 for the arcades. It featured on-foot gameplay and a unique control scheme where the player moves using an eight-direction joystick and takes aim using a mounted positional light gun. It was also unique in allowing two-player cooperative gameplay for the mission mode, and featured an early deathmatch mode, where either two players could compete against each other or up to four players could compete in a team deathmatch, consisting of two teams with two players each competing against each other.[31]

In 1992, Ultima Underworld was among the first to feature texture mapped environments, polygonal objects, and basic lighting. The engine was later enhanced for usage in the game System Shock. Later in 1992, id improved the technology used in Catacomb 3D by adding support for VGA graphics in Wolfenstein 3D. With these improvements over its predecessors, Wolfenstein 3D was a hit. It would be widely imitated in the years to follow, and thus marked the beginning of many conventions in the genre, including collecting different weapons that can be switched between using the keyboard's number keys, and ammo conservation. 1996 saw the release of The Elder Scrolls II: Daggerfall for DOS by Bethesda Softworks, featuring similar graphics and polygonal structures to other games at the time and furthering the first-person element included in 1994's The Elder Scrolls: Arena, to which it was a sequel.

In 1980, SEGA's arcade space shoot 'em up Space Tactics allowed players to take aim using crosshairs and fire lasers into the screen at enemies coming towards them, creating an early 3-D effect.[32] In 1982, SEGA's SubRoc-3D also featured a first-person perspective and introduced the use of stereoscopic 3-D through a special eyepiece.[33] In 1984, Technosoft released Plazma Line, a first-person space racing game. Released for the FM-7 computer, it is considered the first computer game with 3D polygon graphics.[34] In 1988, Arsys Software's Star Cruiser,[35] an early first-person shooter,[36] was an innovative game that introduced the use of fully 3D polygonal graphics as well as action role-playing game elements. The backgrounds, objects and characters in the game were rendered in 3D polygons, many years before 3D polygons became widespread in the gaming industry. It was released for the NEC PC-8801 computer in 1988,[35] and ported to the Mega Drive/Genesis in 1990.[36]

In 1994, Virtua Cop popularized the use of 3D polygons in first-person perspective shooter games.[37] That same year, Exact released the Sharp X68000 computer game Geograph Seal, a fully 3D polygonal first-person shooter, notable for its unique blend of free-roaming shooting and platform game mechanics. The following year, Exact released its successor for the PlayStation console, Jumping Flash!, which was similar but placed more emphasis on the platforming rather than the shooting.[38]

In December 1994 From Software released King's Field for the PlayStation; a title which seems to predate all other full polygon, free-roaming, real-time, first-person, action games. It contains RPG elements and a mix of close and long range combat game play.

The 1995 game Descent used a fully 3D polygonal graphics engine to render opponents, departing from the sprites used by most previous games in the FPS genre. It also escaped the "pure vertical walls" graphical restrictions of earlier games in the genre, and allowed the player six degrees of freedom of movement (up/down, left/right, forward/backward, pitch, roll, and yaw). Thus, Descent was the first first-person game in the modern era to use a fully 3D engine in all aspects of gameplay. A few websites allow users to play FPS games online. Mercenary Camp FMS and Quake Live are examples of such browser-based FPS games.